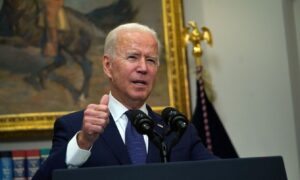 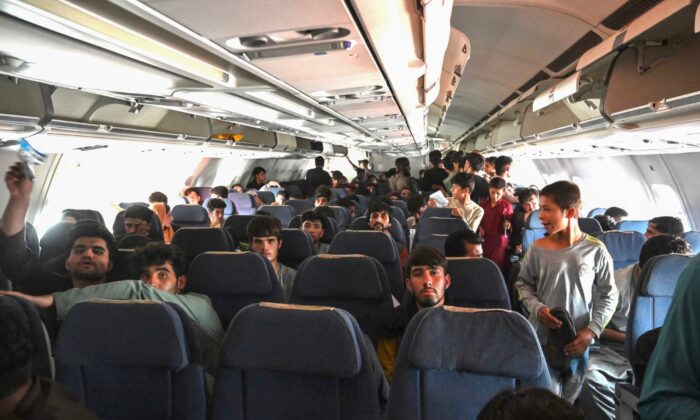 Afghan passengers sit inside a plane as they wait to leave the Kabul airport in Kabul, Afghanistan, on Aug. 16, 2021. (Wakil Kohsar/AFP via Getty Images)
Afghanistan

Afghans With Authorized Papers to Be Allowed to Travel After Aug. 31: Taliban

The Taliban terrorist group said that Afghan nationals who are able to show authorized travel documentation will be allowed to leave the country even after international troops have completely withdrawn, said a senior German diplomat.

Markus Potzel, the envoy, confirmed the latest development on Wednesday as he traveled to Doha and negotiated with the head of the Taliban’s political office and his team.

Taliban chief negotiator, Scher Mohammed Abbas Staniksai “assured” him that “Afghans with legal documents will continue to have the opportunity to travel on commercial flights” beyond the Aug. 31 cut-off date, according to a statement from the ambassador on social media.

Many people in Afghanistan feared that they would no longer be able to leave the country once international troops have completely withdrawn.

Director Stanekzai assured me that Afghans with legal documents will continue to have the opportunity to travel on commercial flights after 31 August.

It is unclear if Staniksai’s announcement is related to an earlier statement by the terrorist group several days ago, when a Taliban spokesperson warned that they will reject any demands by Western forces to extend the Aug. 31 deadline in order to allow more time to complete evacuation operations.

“If the U.S. or UK were to seek additional time to continue evacuations—the answer is no. Or there would be consequences. It will create mistrust between us. If they are intent on continuing the occupation, it will provoke a reaction,” Suhail Shaheen, a Taliban spokesman, told Sky News.

Potzel noted that Germany has also pledged to increase humanitarian aid for the Afghan people by 100 million euros, but added that the “resumption of development cooperation will be dependent on conditions,” as had been the case with the Afghan government in the past.

Chancellor Angela Merkel told parliament on Wednesday they will continue to help Afghans who worked with German soldiers and aid organizations to leave the beleaguered Central Asian nation if they wish to beyond the Aug. 31 deadline.

“The end of the air bridge in a few days must not mean the end of efforts to protect Afghan helpers and help those Afghans who have been left in a bigger emergency with the takeover of the Taliban,” Merkel said.

“That’s why we are working intensively at all levels to find how we can protect those who helped us, including through the civilian operation of the airport in Kabul,” she added.

Germany has been flying military aircraft from Kabul to Tashkent to evacuate individuals. In its latest update, the German Foreign Ministry confirmed they have evacuated around 4,800 people since Taliban terrorists took over the Afghan capital about two weeks ago. Evacuated individuals include an unspecified number of Germans, Afghans, and nationals of international partners.