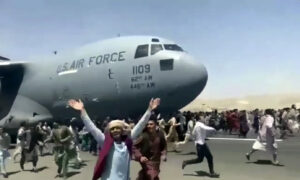 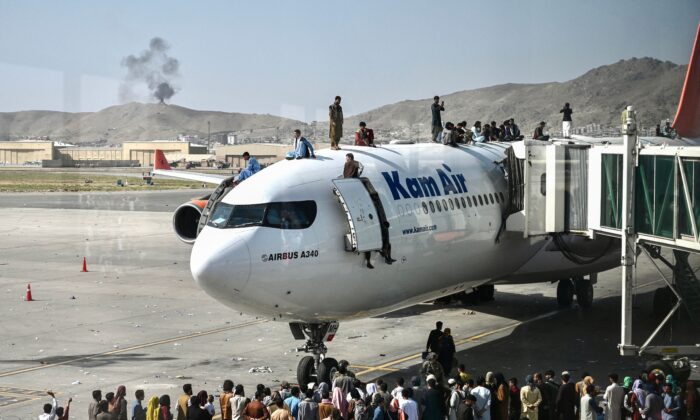 Afghan people climb atop a plane as they wait at the Kabul airport in Kabul, Afghanistan, on Aug. 16, 2021. (Wakil Kohsar/AFP via Getty Images)
Viewpoints

Afghanistan Response: Does the Shadow of the American Revolution Still Hang Over US Foreign Policy?

The way the Biden administration chose to withdraw from Afghanistan is undoubtedly a major public policy failure, not only for the United States and the people of Afghanistan, but also for the free world.

Equally lamentable is the fact that despite the long U.S. involvement, and notwithstanding U.S. military hardware and training, there was no Afghan institution able to show leadership and strength or to coordinate the slightest resistance to this band of evil and dangerous Islamic extremists reassuming their tyrannical dictatorship.

The world may now be looking at the initial development of a base from which terrorism will be launched worldwide, adding Kabul to the emerging Beijing–Moscow–Tehran axis of hostile dictatorial powers.

For many years now, whenever I’ve talked to an Afghan immigrant and commiserated with the developments in their country, I ask whether there was ever a time when Afghanistan was at peace and great hope reigned.

Without exception, each immigrant referred to the time when King Mohammed Zahir Shah introduced democratic rule, when the country was at peace, when there was economic progress, when women were increasingly liberated, and when education was becoming more accessible. Without hesitation, many referred to this as a golden age.

This reform period began in 1963, when the king dismissed the authoritarian prime minister, his first cousin and brother-in-law Sardar Muhammad Daoud Kahn.

But 10 years later, when the king went to London for an eye operation and was recuperating in Italy, the same Daoud had his revenge, seizing power and proclaiming a one-party republic.

Daoud was killed soon after in a 1978 military coup, and what followed was a Soviet invasion, a communist puppet government, a civil war, and, eventually, a Taliban dictatorship.

Under Osama bin Laden, al-Qaeda engaged in attacks on various targets, including U.S. embassies, culminating in the tragedy of 9/11.

When it came to a new Afghan government, a loya jirga, or grand assembly, was held in Kabul in 2002.

But the United States put all its hopes on Hamid Karzai, even though King Mohammed Zahir Shah had strong support from the Afghan delegates. According to one report, he was obliged to publicly renounce any monarchical leadership at the behest of the United States.

Karzai’s writ never went far, and he was later often referred to derisively as the “mayor of Kabul.”

He was succeeded by Ashraf Ghani, who vacated the presidential palace and fled the country as the Taliban advanced into Kabul.

In blocking the return of the king in 2002, the Bush administration rejected the best chance of unifying the country and providing for stability and progress not known in the history of Afghanistan, except for during Shah’s earlier reign.

Although the king was old (he passed away in 2007), as a monarch, he would have instinctively realized that one of his most important tasks was to ensure his succession.

What’s most commendable about his son, Crown Prince Ahmad Shah Khan, is that he has never shown any ambition for power, a good prerequisite for a constitutional monarch.

But the United States, with its failure to back the king and its most recent move to pull out of Afghanistan, has exposed a serious lack of strategic thinking. In fact, it has approached Afghanistan in ways similar to yet different from its predecessor, Great Britain.

A benign English-speaking power and a nation under the rule of law, the United States never hungered for a world empire, if only because she already enjoyed an enormous landmass.

But the shadow of King George III—who lost the colonies during the War of Independence—still curiously hangs over U.S. foreign policy.

U.S. Gen. Douglas MacArthur was wise enough to see that Japan would be ungovernable if the monarchy weren’t retained after World War II. Accordingly, he refused to order a trial of the emperor for war crimes.

However, the United States has tended at times to reject the concept of a monarchy when helping nations democratize.

This is despite the U.S. constitutional model falling to authoritarianism on several occasions when exported to lands outside the unique and liberty-loving environment of the United States.

One example of this goes as far back as France in 1851, which, despite its flirtation with an executive presidency and the second republic, was still converted by Napoleon III into authoritarian rule until he was overthrown in 1870.

But the constitutional monarchical model of democracy, which has been exported globally, has worked well.

All the other Five Eyes partners, the inner circle of the United States’ allies—the United Kingdom, Canada, Australia, and New Zealand―are constitutional monarchies with the one sovereign, Elizabeth II.

Of similar importance, the two most stable Arab countries are monarchies: Morocco and Jordan.

Thus, it’s necessary to ask if the United States’ bias against a monarchical system has clouded its decisions in the international environment—particularly against one such system that perhaps could have made a nation like Afghanistan stronger.

It’s hard to imagine that under such a system, Afghanistan would have seen an unknown and completely untested Hamid Karzai elevated to power.

Nor would the retreat from Kabul have been so mishandled that it became a mere surrender to the Taliban.