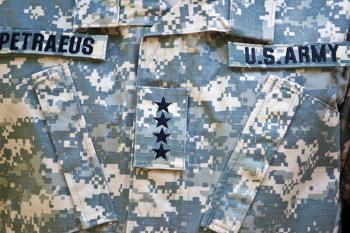 Gen. Petraeus said he is willing to recommend the president push back the start date for sending U.S. troops back from Afghanistan. (Majid Saeedi/Getty Images)
World

The quick comments by U.S. Defense Secretary Robert Gates and Deputy Press Secretary Bill Burton came after Gen. David Petraeus, chief commander of U.S. and NATO forces Afghanistan, downplayed the importance of July 2011 in an interview with “Meet the Press” on Sunday.

Gates told the Los Angeles Times that the date of July 2011 for starting the gradual withdraw of U.S. troops was set in stone. Burton reiterated the message from aboard Air Force One saying “the date is the date,” and that “the date is not negotiable.”

In Gen. Petraeus’s first interview since taking over from Gen. Stanley McChrystal in June, Petraeus said he is willing to recommend the president push back the start date for sending troops back.

According to Petraeus, July 2011 is not an event but the start of a process, which is based on conditions.

“And again, as he [Obama] has said, as NATO officials have said, conditions-based, and that’s a real key element of this,” Petraeus said.

The general said that July 2011 as the pullout date is not absolute, but seen as ”a message of increased urgency. … That’s what July 2011 really connotes,” he said.

The American military presence in Afghanistan has lasted almost a decade and its reported that progress is minimum. According to Petraeus, real progress only started last spring with the improvement of security for people in the central Helmand Province.

“This has been going on for some nine years or so, that there is understandable concern, in some cases frustration,“ he said. “It is to all the participants, those in Kabul … that we’ve got to get on with this. … We’ve got to really put our shoulder to the wheel and show during the course of this year that progress can be achieved.”

Petraeus said in his conversation with Obama it was clear he should report the situation on the ground.

Petraeus also mentioned that the president “has some issues with which he has to deal that we don’t have to worry about.”

A recent poll by the Wall Street Journal indicated that 70 percent of the Americans lack confidence in a successful outcome to this war.

During a June 27 press conference, Obama said, “I believe we’ll need to provide assistance to Afghanistan for a long time to come,” indicating the need for a gradual withdrawal.

In addition to making further efforts to develop good relations with Afghan President Karzai—a task which McChrystal was among the few to accomplish—Petraeus will also soon be launching the awaited military push into Kandahar, which remains a key Taliban stronghold.