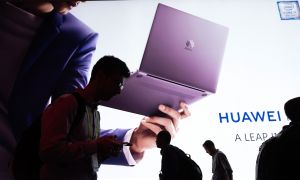 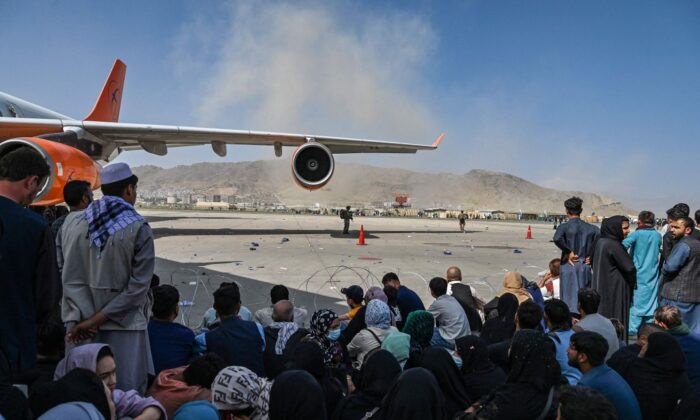 Afghan people sit as they wait to leave the Kabul airport after a stunningly swift end to Afghanistan's 20-year war, in Kabul on Aug. 16, 2021. (Wakil Kohsar/AFP via Getty Images)
Viewpoints

Afghanistan: Our Strategy Must Be Harder and Smarter

Twenty years after Sept. 11, 2001, when Osama Bin Laden orchestrated the deaths of almost 3,000 people in the United States and George W. Bush invaded Afghanistan to enforce the law against unrepentant terrorism by the Taliban and al-Qaeda, America’s mission in the country is coming to a humiliating end.

Americans, British, Australians, and Indians are scrambling to get out. But the airport in Kabul, where I contributed to the war effort for a year and a half from 2011 to 2013, is now impenetrable for the regular Afghans, including over 3 million peacefully religious Sufis, who fear massacre at the hands of extremist Taliban fighters in the street.

The Taliban is going door to door looking for foreigners. Thousands are “sheltering in place,” per the instructions of their home governments, rather than risk arriving at the airport before their time, and being engulfed by the surging Afghans who also wisely seek to escape the Taliban’s terrible brand of Sharia “justice.”

Afghans clinging to, and then falling, from a U.S. military cargo plane as it lumbered in a steep climb from the tarmac symbolized America’s retreat, and will doubtless be mocked in Beijing and Moscow. But like the shocking scenes of Americans jumping to their deaths from the Twin Towers, these lost lives are the fault of the Taliban and al-Qaeda, not America. They are the fault of authoritarian countries around the world, including China and Russia, as well as Pakistan, who have given financial, military, or diplomatic aid to the Taliban over the past 20 years.

Without that aid, without state support from abroad, the Taliban could never have “won” this war against America, its allies, and the idea of democracy.

The former director-general of ISI, Pakistan’s intelligence services, rightly said that “the ISI defeated America in Afghanistan, with America’s help.” It’s a true statement and one that America’s leadership must seriously contemplate.

What went wrong in Afghanistan was American strategy. We must get tougher and smarter. We must go to the roots of the problem, or we will die of a thousand cuts. When America dies, democracy dies. The effects will be global and irreversible.

The Taliban won through Maoist tactics, perhaps learned from Chinese intelligence or allies. Taliban tactics included surrounding the cities from the countryside, and buying off political, military, and police leadership so that when the signal came, most Taliban could walk into Kabul without a shot fired.

The speed and ease of the Taliban’s victory shocked and surprised the world. But it needn’t have. The indicators of a corrupted officialdom in Kabul, and on military bases around the country, drunk on profits from Taliban opium networks, financial scams, and “bags of money” from Iran, according to former Afghan President Hamid Karzai, were there for all to see.

America had been too lax with Afghanistan’s leadership, who were often in it for themselves rather than for ideals such as democracy, human rights, rule of law, and religious tolerance. We looked the other way while the Taliban ran opium fields and trafficking networks that benefited corrupt Afghan leaders. America wanted to buy victory on the cheap, and without rocking the boat. It turned out to be the most expensive way, in blood and treasure. We failed because we were too soft, on drug trafficking and the corruption of Afghan officials, on the Taliban’s military and intelligence enablers in Pakistan, and on Pakistan’s enablers in Beijing.

Instead of fighting all of the above at 100 percent, we told our soldiers to walk on eggshells. We wanted to maintain trillions of dollars of U.S. investments in China, and our “allies” in Pakistan (which has, in fact, long been a Chinese ally). We paid Pakistan billions of dollars to allow the transport of materiel to our troops in Afghanistan when Pakistan should have pitched in itself. We paid millions more for their promises to secure their own illegal nuclear weapons so terrorists wouldn’t use them against us. Our aid to Pakistan peaked in 2010, the year before the drawdown started. That’s called highway robbery. It’s giving in to terrorism.

America, with all of our idealism, now looks the sucker. We rightly want to bring peace, stability, democracy, and human rights to the world, and we were willing to pay for it as we remembered the alternatives, such as World War II. The United Nations was our answer to a world war never happening again. We tried through the U.N. to ensure that countries would never again take the territory of other countries, countries would respect the human rights of their populations, and never again commit genocide.

Now with China’s rise, the founding values of the U.N. system, which were determined by American and British design, are being wiped out. China doesn’t like the origins of the U.N. and doesn’t care about any of its principles. It just wants to use the organization to further its own goals of power and control on a global level. It’s telling that the first international organization that the Taliban invited to stay is a U.N. agency.

We see China’s hypocritical support for the U.N. in Beijing’s genocides in its own country, its ready support for the Taliban, its apparent willingness to compensate the Taliban to allow it to extract resources such as copper from its $3 billion mine at Mes Aynak, and in the process, destroy the ruins of an ancient Buddhist city. Beijing’s hypocrisy is on full display in its willingness to support Pakistan with billions of dollars of investment even as Pakistani military and intelligence elements support the Taliban, which regularly planted bombs in the middle of market day, assassinated human rights activists, and killed Americans and allies with IEDs (improvised explosive devices).

The fall of Kabul, and with it the stumbling of democratic ideals that America and allies attempted to build in Afghanistan, is a blow not only to America but to all freedom-loving people around the world. It indicates increased influence in Central Asia by China and the terrorist elements that the Chinese Communist Party covers for, including in Pakistan.

If America and our allies come back, and we must, we are going to have to come back swinging harder and smarter.