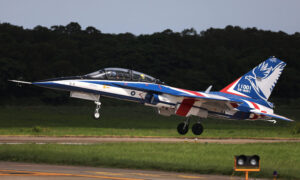 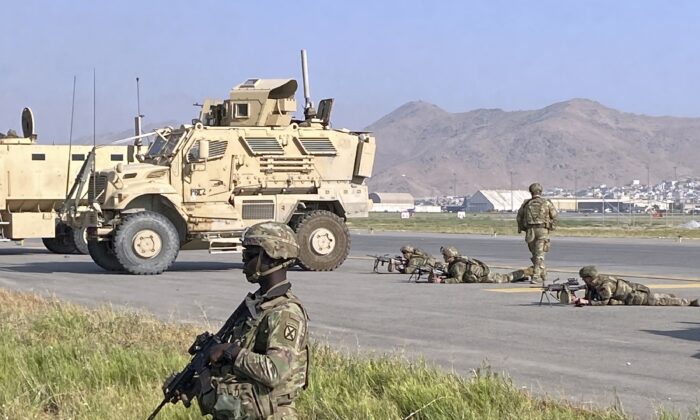 U.S. soldiers stand guard along a perimeter at the international airport in Kabul, Afghanistan, on Aug. 16, 2021. (Shekib Rahmani/AP Photo)
Thinking About China

In the wake of the collapse of the government of Afghanistan and the evacuation of Americans and their Afghan staff members and supporters, a big question is what implications this may have for Taiwan and other American allies in the Indo-Pacific region.

The Chinese Communist Party’s (CCP’s) international mouthpiece, Global Times, has been quick to warn Taiwan and other American allies in Asia that just as the United States has abandoned Afghanistan at the crucial moment, so it cannot be relied upon to support and defend other allies like Taiwan, Japan, South Korea, Australia, and the Philippines. Better for these countries to make peace and friends with China and the CCP now than to put their hope in some promise of commitment by the United States, says the Times.

This is, of course, clever and powerful propaganda, but it dishonestly compares apples and oranges. The relationship between the United States and Afghanistan was a completely different kind of relationship than that between say the United States and Taiwan or Australia or Japan. In the case of Afghanistan, Washington spent more than twenty years first defeating al-Qaeda and then attempting to help establish a democratic national government. Whether this was the right or wrong thing to do can be and will be debated for many years. But it was an entirely different thing from the mutual defense alliances of America with its politically established, democratic, and independent allies in Asia and the rest of the world.

Indeed, one of the reasons for President Biden’s decision to sever the U.S. relationship with Afghanistan was to avoid getting bogged down on relatively small issues in order to better address the greater issue of China’s increasingly strong and aggressive policies in the Indo-Pacific region.

If one looks at the impact of Afghanistan on the world or on the United States, it is very small. Indeed, one reason the whole project lasted so long was that it was small and significantly out of the vision of the public. The same cannot be said of China or of the relationships of China with the United States and the other major countries of the Indo-Pacific region. This is especially true of Taiwan which is constantly now in a kind of shadow war with Beijing as it constantly sends bombers and fighters into Taiwan airspace and conducts naval maneuvers in the waters around the island.

The Biden administration has already signaled its intention of strengthening and diversifying U.S. forces in the South China Sea and Indo-Pacific area. It has also greatly strengthened ties with allies such as Japan, Australia, India, the Philippines, and South Korea with the objective of deploying greater forces in the region than those of China. Recent naval convoys from the UK, France, and Germany have not only added to the allied force level but demonstrated to China the commitment to defend Taiwan not only from the United States but from a global allied network of democratic states.

In that context, however, it is imperative that Taiwan take immediate and drastic steps toward increasing its own capacity to defend itself. The free world is boldly showing its support of Taiwan’s democratic government and society. Taiwan must now do as much or more for itself as its allies are doing for it.

The strategy of Taiwan and its allies must be to prevent the PLA from establishing beachheads on the island in the event of an invasion. Beijing’s forces must be repelled, and any established occupation of Taiwanese territory overrun and thrown back into the sea. It is thus imperative that the Taiwanese government make the island into a porcupine somewhat as the Swiss have made Switzerland.

During World War II, Hitler’s Germany had plans for invading and occupying Switzerland. Yet it never did so. Why? Because the Swiss had taken advantage of their rugged terrain and fortified every mountain pass, every tunnel, and every village. Had they invaded, the Germans would eventually have won, but only at an enormous cost they couldn’t afford.

Like Switzerland, Taiwan is a rugged country with only a few beaches on which an amphibious landing might be attempted. It is mountainous and covered in some areas by extensive vegetation and jungle. Yet, until very recently, it has not done much to make itself into a porcupine. It has bought advanced fighter jets from America, and that is necessary. But it is not enough. Taiwan must go all out as fast as possible to demonstrate to Beijing that an invasion would be extremely costly and not at all certain of a final victory.