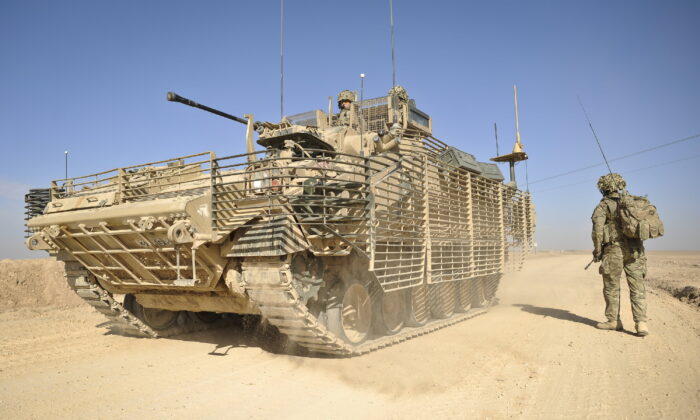 A Warrior armoured vehicle on patrol in Afghanistan. (Ben Birchall/PA)
US

The special inspector general for Afghanistan reconstruction (SIGAR) says he can’t account for a significant amount of cash that was handled by the now-defunct Afghan government, although he did cast doubt on Russian reports that the country’s former president fled with $169 million as his U.S.-backed regime collapsed in August 2021.

John Sopko revealed those details in his June 7 interim report to Congress, which sought answers about the U.S. weaponry, cash, and other resources left in Afghanistan after the U.S. military withdrawal from the country.

This latest report focuses on cold, hard cash—although exactly how much is unclear. Sopko confirmed the apparent theft of at least $70 million, but said he’s still investigating what happened to another rumored $169 million.

“Attempts to loot other government funds appear to have been common,” he said. “Yet with Afghan government records and surveillance videos from those final days likely in Taliban hands, SIGAR is currently unable to determine how much money was ultimately stolen, and by whom.”

According to Sopko, about $70 million was taken from the now-defunct National Directorate of Security (NDS), which was the Afghan government’s version of the CIA. Sopko based his estimate on interviews with former Afghan officials.

“According to one former senior official, on Saturday, Aug. 14, this cash reserve of U.S. dollars disappeared from the NDS vault,” he said. “By the time the Taliban arrived the following day, only a small reserve of Afghanis [the currency of Afghanistan] remained.”

Sopko said the secretive nature of NDS—which, like the CIA, funds covert operations from a black budget—means that he’s not privy to what the agency’s true budget was.

“As this money was not a line item on any budget, it is very difficult to track,” he said.

While unable to account for the NDS secret funds, Sopko said in his report that there’s no evidence to substantiate Russian claims that ousted U.S.-backed Afghan President Ashraf Ghani fled the country with an estimated $169 million on four helicopters as his government collapsed around him.

Ghani did flee the country with cash, but it would have been extremely difficult for his four Mi-17 helicopters to carry $169 million along with the 53 people who left with the president, Sopko said.

“This amount of cash would be difficult to conceal … $169 million in $100 bills, stacked end to end, would form a block 7.5 feet long, 3 feet wide, and 3 feet tall,” he said. “In addition, the hot weather and fuel load of the helicopters could not have sustained the additional weight of heavy cash.”

Basing his conclusions from interviews he conducted with Afghan officials, Sopko said it’s more likely that the presidential delegation left with about $500,000—$120,000 of which was used to charter a flight to the United Arab Emirates from Uzbekistan.

“The remaining cash that was not spent on the charter plane was distributed among these 54 people. Some was sent to family members of guards still in Afghanistan, some was sent to senior staff still in Afghanistan, some was given to senior staff for commercial airfare to third countries where they had citizenship, and the rest was distributed among the group,” the inspector general said.

Sopko said that he’s continuing to collect information as he prepares his final report. His report suggests that a full accounting of the missing funds could be impossible.

“SIGAR does not have sufficient evidence to determine with certainty whether hundreds of millions of dollars were removed from the country by Afghan officials as the government collapsed or whether any stolen money was provided by the United States,” he said. “However, we will continue to collect information on this as we prepare a final report.”