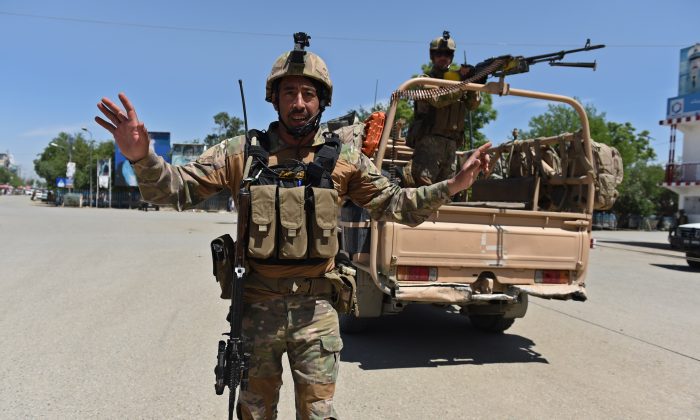 KABUL, Afghanistan—Afghan government forces pushed overnight into the strategic northern city of Kunduz that was captured by the Taliban earlier this week, forcing the insurgents to retreat amid heavy street battles that were still underway Thursday.

But despite prompt claims from officials that much of the city had been liberated, by midday, residents remaining inside Kunduz and hunkering down at their homes said they could still hear explosions and shootings outside.

The fall of Kunduz to the Taliban on Monday marked a major setback for Afghan government forces, which have struggled to combat insurgents with limited aid from the U.S. and NATO troops. The international forces’ role has shifted to training and support after all NATO combat forces withdrew from Afghanistan at the end of last year.

The Taliban denied they had lost the city and the group’s spokesman Zabihullah Mujahid claimed on Thursday that it was still in their hands, saying “the Taliban flag is still flying” over Kunduz.

The spokesman for the Interior Ministry said the operation to take back Kunduz was launched late Wednesday, with ground forces moving from the airport — where they had massed since the city fell — over roads that had been mined by the insurgents.

Sediqqi claimed that control of Kunduz “was taken by 3.30 a.m.” on Thursday but conceded that an operation “to clear the city is ongoing” and could take some days.

He told The Associated Press the battle is a joint army and police operation and that roadblocks set up by the Taliban to prevent any movement had been removed. He said essential supplies, including food and medicine, would be delivered soon to the residents.

Sediqqi said around 200 Taliban fighters have been killed in the fighting so far but did not provide a figure for government casualties. Kunduz police chief, Sarwar Hussaini, said bodies of dead Taliban lay on the streets but that the clearance operation was complicated because some Taliban fighters had hidden inside people’s homes.

Doctors without Borders, the international charity which runs a trauma center in the city, said that since the city fell it had admitted 296 wounded patients, 64 of them children and 74 in critical condition. Kate Stegeman, the organization’s communication director in Afghanistan, said 40 people had died.

Residents reported street battles and gunfire in various areas of the city.

Zabihullah, who lives close to the main city square and who like many Afghans prefers to use one name, said that “intense fighting is continuing on the streets of city.”

“The situation is really critical and getting worse, and I’ve just heard a huge explosion from a bomb near my house,” he said, speaking to the AP over the telephone from his home.

Another resident, Hameedullah said that heavy clashes were underway in the Khuja Mashhad area of the city, about 200 meters (218 yards) north of the square. “Everyone is staying indoors, but there is still sporadic firing,” he said. “There are explosions but I can’t tell if they are bombs being dropped from the planes I can hear overhead, or rockets.”

Fighting was also on in the Bandr-i-Iman Sahib district in the west of Kundiz, where resident Munib Khan said the Taliban were armed with rocket-propelled grenades and were putting up a heavy fight. Khan said the fighting had taken front-stage to the “many problems inside the city,” which now has “no water, no electricity.”

It was not possible to immediately gauge how much of Kunduz was secured by the Afghan forces. The capture of the city by the Taliban, which began with a coordinated attack Monday, had taken the government, military and intelligence agencies by surprise.

The Taliban spokesman, Mujahid, in remarks posted on his Twitter account, claimed that “life in Kunduz is normal” — an apparent attempt to refute government statements that Afghan forces had pushed the insurgents out from the center to the city’s more far-flung neighborhoods.

Earlier in the morning, Mujahid had sent a text message to The Associated Press, saying that “the United States, with their puppets, have been bombing Kunduz city. Government forces have received heavy casualties.”

Afghan troops, backed by U.S. airstrikes, had massed on the outskirts of the city and at the Kunduz airport on Wednesday in a buildup of what was expected to be a long and difficult campaign to drive out the Taliban.

Also Wednesday, two U.S. airstrikes were launched around 5 p.m. in support of the Afghan troops at Kunduz airport, and another at 8 p.m. on the outskirts of the city, said U.S. Army Col. Brian Tribus, spokesman for the U.S.-NATO mission in Afghanistan. He said the U.S. has carried out six airstrikes since Kunduz fell Monday.

President Ashraf Ghani has come under intense criticism for the fall of the city. He went on national television to reassure his people earlier this week that Kunduz would be recaptured.

But the damage to Ghani’s one-year-old administration had been done. On Thursday morning, hundreds of people gathered outside the presidential palace in Kabul, calling for his resignation.

“We are not happy with this government, every day there is fighting,” said Foruzan Haydari, a 23-year-old student.

In a statement Thursday, the presidential palace said Ghani had spoken with military leaders in Kunduz to get an update on the situation. It also said the president will send a team to Kunduz to investigate how the Taliban had been able to infiltrate the city.