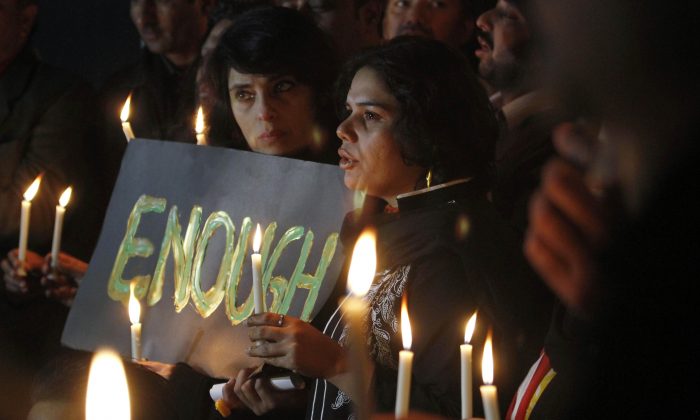 Pakistani civil society members take part in a candle light vigil for the victims of a school attacked by the Taliban in Peshawar, Tuesday, Dec. 16, 2014 in Islamabad, Pakistan. (AP Photo/Anjum Naveed)
International

KABUL, Afghanistan—Taliban representatives have been meeting this week with female Afghan lawmakers and peace negotiators in the Norwegian capital Oslo, a Taliban spokesman and the Afghan president’s office said on Friday.

In an email to media organizations, the Taliban’s Zabihullah Mujahid said the discussions were informal and could not be categorized as “peace talks.”

An Afghan official told The Associated Press that talks took place on June 3 and 4 as part of a long-term Afghan peace initiative by the Norwegian government. Norway’s Foreign Ministry spokesman Frode Andersen said the meetings would conclude on Friday.

“They are not part of any (Afghan) government initiative, and were invited to an unofficial meeting, not as official delegates,” he said, speaking on condition of anonymity as he was not authorized to speak publicly on the matter.

Female members of Afghanistan’s High Peace Council, a government body charged with negotiating an end to the war with the Taliban, had also attended in an unofficial capacity, the official said.

The office of President Ashraf Ghani issued a statement saying all Afghan citizens had the right to “work for peace where and whenever they want.”

“We appreciate these are non-government talks, they are not representing the government of Afghanistan,” the statement said.

The Norwegian Foreign Ministry confirmed the discussions had taken place between “Afghans of different political backgrounds … expressing their personal views.”

The meeting is the third face-to-face contact between Taliban and Afghan officials in recent months, though both sides have stressed their informality.

Ghani has prioritized bringing the Taliban to the negotiating table and ending their insurgency. He has promised transparency in all dealings with the insurgents, who have been fighting Kabul for 14 years — since being ousted from power by a U.S.-led invasion in December 2001.

The Afghan official said the Taliban’s representatives to the talks were Sher Mohammad Abbas Stanekzai, a former senior official of the Taliban regime that controlled Afghanistan until December 2001, and Mohammad Zahid Ahmadzada, who was a junior diplomat in that regime.

The involvement of high-profile women in such a meeting is an indication of concerns about what, if any, concessions might be made to the Taliban by the Afghan government in order to bring peace. Ghani, and his wife Rula, have said there will be no roll-back of hard-won constitutional protections for Afghan women as part of any peace deal.

Nevertheless, rights to equality and protection from violence are widely regarded as vulnerable to Taliban demands. The Islamic militant group, during its 1996-2001 reign in Afghanistan, banned women and girls from education and work, and ruled they could not go outside unless wearing an enveloping burka and accompanied by a male relative.

In modern-day Afghanistan, prominent women are regularly targeted by the insurgents, and some have been killed. Barakzai survived a suicide-bombing assassination attempt late last year, though no claim of responsibility was made for the attack.

Recent meetings in Qatar between Taliban representatives and High Peace Council members resulted in a Taliban statement that appeared to indicate a softening on some policies and a possible willingness to eventually enter into a dialogue with the Afghan government. But actual formal peace talks are seen by diplomats and other observers as being years away.

In the meantime, each side is fighting for supremacy on the battlefield, as the Taliban’s summer offensive has spread across the country and Afghan forces are taking huge casualties — fighting alone following the departure last year of most international combat troops.