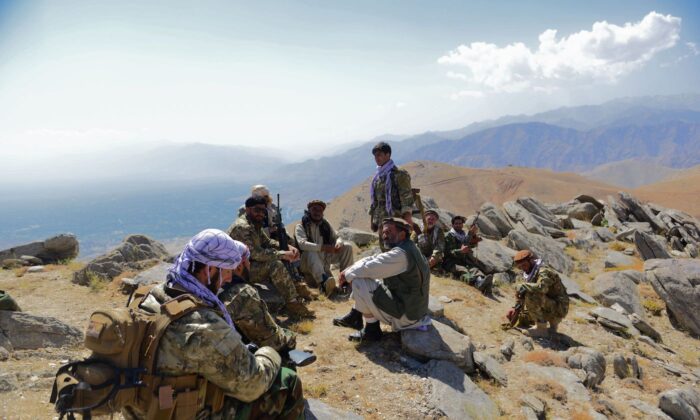 The anti-Taliban resistance group National Resistance Front of Afghanistan (NRFA), on Sept. 6 pushed back against the terrorist group’s claims of victory in the Panjshir Valley—the last Afghan province holding out against the group after it seized control of Kabul on Aug. 15.

“Taliban’s claim of occupying Panjshir is false,” the NRFA wrote on Twitter. “The NRF forces are present in all strategic positions across the valley to continue the fight. We assure the ppl [sic] of Afghanistan that the struggle against the Taliban & their partners will continue until justice & freedom prevails.”

“With this victory, our country is completely taken out of the quagmire of war,” the spokesman said.

Photos of Taliban fighters in front of the Panjshir governor’s office have been shared by the Taliban. The office is located at the entrance of the valley.

Ahmad Massoud, the leader of the opposition group resisting Taliban forces, hasn’t yet released a statement on the matter. On Sept. 5, he said on Facebook that he welcomed proposals from religious scholars for a negotiated settlement to end the fighting.

“The NRF in principle agree to solve the current problems and put an immediate end to the fighting and continue negotiations,” Massoud, the son of a former anti-Soviet fighter, said in the Facebook post.

“To reach a lasting peace, the NRF is ready to stop fighting on condition that Taliban also stop their attacks and military movements on Panjshir and Andarab,” Massoud said, referring to a district in the neighbouring province of Baghlan.

Prior to the Taliban’s latest statement, Fahim Dashti, a spokesman for the NRFA, said that the Taliban is spreading propaganda and trying to spread disinformation.

“The resistance forces are ready to continue their defense against any form of aggression,” he said.

Another spokesperson for the resistance group told Al Jazeera on Sept. 5 that they had captured hundreds of Taliban members, adding that their forces surrounded “thousands of terrorists” loyal to the Taliban in Khawak Pass and that the Taliban had abandoned vehicles and equipment.

Also speaking to the Qatari-owned broadcaster, Fahim Dashti said that 1,000 Taliban members were killed, wounded, or captured in clashes.

It comes amid reports of heavy fighting continuing for days, with each side claiming it inflicted significant numbers of casualties. Multiple reports of drone attacks on NRFA fighters circulated on social media in the early hours of Sept. 6; The Epoch Times hasn’t been able to independently verify these accounts.

The Taliban, which swept through the country ahead of the final withdrawal of U.S.-led forces on Aug. 31, were unable to control the valley when it ruled Afghanistan from 1996 to 2001.