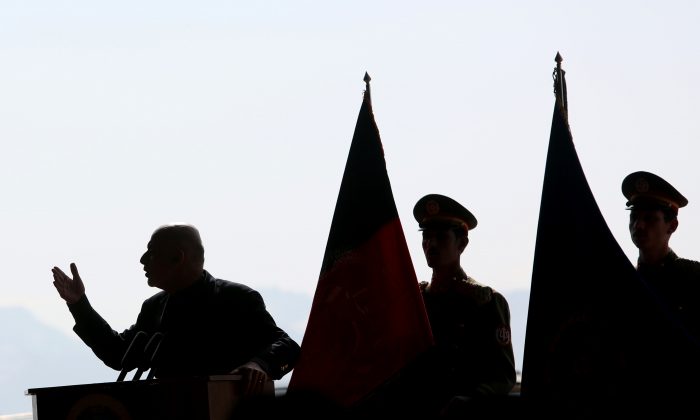 Afghan President: ISIS Being Wiped Out in Afghanistan

KABUL, Afghanistan—Afghanistan’s President Ashraf Ghani said on Sunday that the Islamic State (ISIS) has been defeated in the eastern parts of the country, where it had taken over some remote districts.

Afghanistan will be their [ISIS] graveyard.
— Ashraf Ghani, president, Afghanistan

“Afghanistan will be their graveyard,” he said in an address broadcast live on national television.

ISIS has had a presence in Afghanistan for more than a year. Officials have said most militants calling themselves ISIS are disaffected Taliban fighters.

Afghan forces have claimed victory following a 21-day operation in the Achin and Shinwar districts of Nangarhar, claiming at least 200 militants killed, a provincial official told The Associated Press.

Achin and Shinwar are among a number of districts in the remote mountainous regions along the Pakistan border that were overtaken by ISIS loyalists in recent months. Operations against the militants included airstrikes to destroy bases and a radio station that was broadcasting ISIS recruitment messages across Nangarhar province. The radio station was destroyed, along with at least seven militants, on Feb. 1.

“The aim of the operation in Nangarhar was to root out ISIS from the area,” said Afghan Army Lt. Col. Sharin Aqa, a spokesman for the 201 Corps.

The operation was aided by local residents who set up checkpoints to help maintain security in their villages. These so-called “local uprisings” had supplemented the Afghan forces, which have been stretched since the drawdown in 2014 of the international combat mission, he said.

The Afghan government is attempting to end the war on its territory with hopes of drawing the Taliban into a dialogue and eventual peace talks. The ISIS presence has been principally in the east, where they have also fought the Taliban for territory.

Change in Command of US-NATO Forces in Afghanistan

The Taliban have intensified their war to overthrow the Kabul government. The usual winter lull on fighting did not come in the southern regions, notably Helmand province where most of the opium that produces the world’s heroin supply is grown.

Officials have said the fight in Helmand, which the Taliban consider part of their heartland, is for control of the smuggling routes, and some Taliban groups have been fighting each other. The drug production is worth up to $3 billion a year. ISIS is believed to be interested in Afghanistan because of the riches offered from contraband, including weapons, alcohol and minerals.

A direct dialogue between representatives of the government and the Taliban had been slated for the first weeks of March, reviving a peace process that was scuttled last year when Kabul announced that the Taliban’s founder and leader, Mullah Mohammad Omar, had been dead for more than two years.

A Taliban statement on Sunday said that Mullah Omar’s successor, Mullah Akhtar Mansoor, had not given approval for any participation in talks with the Afghan government.

Kabul has reached out to all insurgent groups to join the peace process and has said it will wipe out those who do not participate.