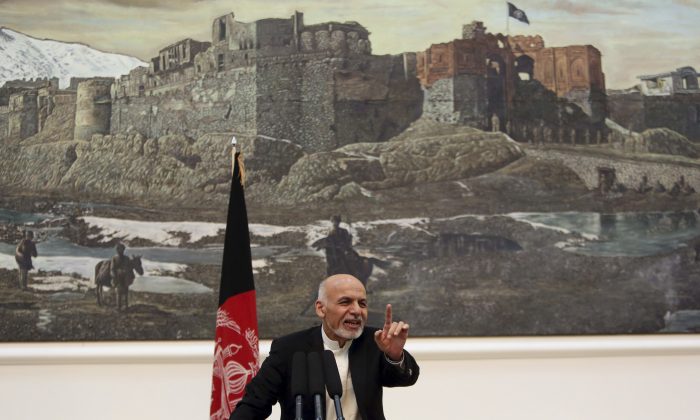 Afghanistan's President Ashraf Ghani Ahmadzai speaks during a press conference in Kabul, Afghanistan, Saturday, Nov. 1, 2014. Ghani Ahmadzai vowed that his crackdown on official corruption will ensure there is no repeat of a banking scandal in which almost $1 billion was embezzled, decimating confidence in the country's financial sector. (AP Photo/Rahmat Gul)
News

KABUL, Afghanistan—Afghan President Ashraf Ghani Ahmadzai vowed Saturday to crack down on corruption and ensure security in his nation, even as insurgent attacks in an eastern province killed at least 12 local troops.

Speaking after returning from a four-day visit to China, Ghani Ahmadzai said that those who embezzled almost $1 billion from the Kabul Bank in 2010 would face justice in the courts. The incident decimated investor confidence in the country’s already anemic financial sector.

Ghani Ahmadzai has made the battle against endemic graft a key policy initiative. One of his first actions after taking office was to reopen the Kabul Bank case and begin proceedings against the high-profile figures who have been accused of using the bank as personal slush funds.

On security, the president said that Beijing was committed to helping bring peace to Afghanistan after more than 30 years of war and that Afghan territory never again would be used as a base for insurgents to launch attacks on other countries.

While in China, he invited the Taliban to join in a peace process backed by the international community, his first direct reference to the insurgents who have stepped up attacks aimed at bringing down his 1-month-old government.

“Peace is not easy, but it is compulsory,” he told a news conference broadcast live Saturday on national television. “If bringing peace was easy, we would have had peace earlier.”

Ghani Ahmadzai has made no specific proposals for peace talks with the Taliban. Meanwhile, violence Saturday killed at least 12 members of the country’s security forces in eastern Logar province.

Din Mohammad Darwesh, a spokesman for the provincial governor, said a suicide car bomber killed six police officers and three soldiers in Logar’s Azra district. He said the blast wounded some 20 civilians and destroyed buildings. The Taliban later claimed responsibility for the attack.

Soon after, a roadside bomb killed three police officers and wounded three in the province’s Baraki Barak district, Darwesh said. No one immediately claimed that attack.

Insurgents have intensified attacks against both Afghan and NATO security forces across the country following a fierce summer of fighting. Most international security forces are preparing to withdraw by the end of the year.