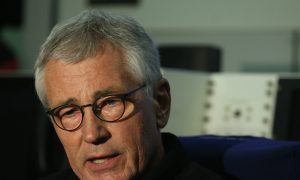 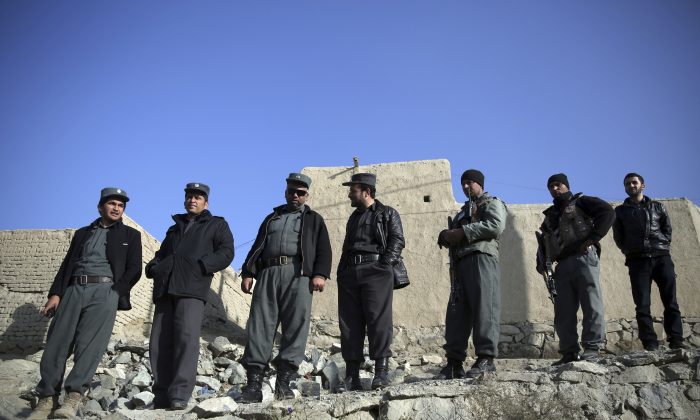 KABUL, Afghanistan—When brothers Amir and Mosha Jan joined Afghanistan’s police two years ago they believed that their patriotic duty was more important than obeying their father, who did not want his only sons joining the ranks of a police force on the front lines of the war against the Taliban.

The father’s worst fears came true earlier this year, when gunmen on a motorcycle opened fire on the two brothers as they patrolled the streets of the one-time Taliban capital Kandahar. “Two Taliban on a motorcycle started firing at us,” Amir, 25, said. “My brother was shot dead on the spot.” Mosha was 23 years old.

As U.S. and international combat troops leave Afghanistan after more than 13 years fighting the Taliban, Afghan policemen are dying in record numbers as they perform dangerous tasks usually reserved for the military, according to the head of the European-funded mission to train the police force.

Afghanistan’s war is as hot as it has been since the U.S.-led invasion following the Sept. 11 attacks overthrew the Taliban. The international combat mission ends on Dec. 31, leaving the Afghan security forces in charge after leading the fight since the middle of last year.

Some 5,000 members of Afghanistan’s security forces — army, police and armed rural defense units — have died this year fighting the Taliban, according to Karl Ake Roghe, the outgoing head of EUPOL, the European Union Police Mission in Afghanistan.

“The police have lost something like 3,200 this year, so most of the casualties belong to the Afghan National Police.”
— Karl Ake Roghe, European Union Police Mission in Afghanistan

“The police have lost something like 3,200 this year, so most of the casualties belong to the Afghan National Police,” Roghe, who has led the mission for two and a half years, told The Associated Press. By comparison, some 3,500 foreign forces, including at least 2,210 American soldiers, have been killed in the 13 years since the war began.

“This is the main problem for Afghanistan – how they are dividing the responsibilities for fighting the insurgency. This should be a task for the Afghan National Army, not the police. Currently it belongs to the police and the main part of the fight is done by the police,” he said.

Gen. Joseph Anderson, second in command of the NATO combat mission until it officially ended earlier this month, described the Afghan losses as “unsustainable.”

Afghanistan has 157,000 police in a force created, trained and funded by the European Union. Almost every day, Afghan authorities report the deaths of policemen in Taliban assaults on checkpoints around rural towns and on the outskirts of larger cities. The police receive little backup from the army and do not have air support, medical evacuation or dedicated hospitals that could help reduce deaths, Roghe said.

“They are doing this totally alone and of course they are not properly equipped for this task,” he said.

“They are doing this totally alone and of course they are not properly equipped for this task.”
— Gen. Joseph Anderson, NATO

Amir and his brother were aware of the dangers when they joined the police force, “but we thought if we don’t stand up for our country then who will?” he said.

“I lost my brother. I am proud of him for sacrificing his life for this country, I hope I can do the same,” said Amir, who has since left the police and joined the army. “I know the government is doing less for the police (than for the army) but I don’t want to blame them because they are also not in a good position.”

Many in the impoverished country join the police out of desperation. A policeman earns $200 a month, and the family continues to receive that amount if he is killed in the line of duty, as well as a one-time compensation payment of three times that amount. Officers get around $300 a month.

“I lost my brother. I am proud of him for sacrificing his life for this country, I hope I can do the same.”
— Amir Jan

But it’s an increasingly risky gambit. As international forces have left, they have taken with them air support — helicopters and jets — that allowed ground troops to take the fight to the Taliban. In response, the insurgents have swept into populated areas, where the police are ill-equipped to repel them and where women and children are increasingly caught in the crossfire.

Roghe said the deterioration in security since the Afghans took the lead had been expected and will continue for some years. “ISAF drawing down and the Afghans more exposed — this will create some space for the insurgency,” he said.

Nevertheless, he said the force was sustainable. “We don’t see that they are going to be overrun, we don’t think we will see here in Afghanistan what we have seen in Iraq,” he said, referring to the lightning advance of the Islamic State extremist group across much of northern and western Iraq earlier this year.

“The Afghan security forces are much more stable. But the cost will be enormous and it will take a long time, the next five years, until they will be more efficient and better equipped so they can do the fight with less cost.”

From The Associated Press. AP writer Mirwais Khan in Kandahar, Afghanistan contributed to this story.