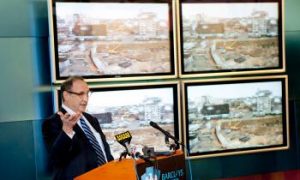 [xtypo_dropcap]T[/xtypo_dropcap]he inauguration of Afghanistan’s new Parliament is in doubt due to continued disputes over the investigation into last September’s fraud-mired parliamentary elections.

Parliament is supposed to open Wednesday, but on Sunday, President Harmid Karzai reportedly would not drop his demand that the tribunal into the elections be allowed to continue. Elected minority representatives claim the investigation is unconstitutional and want the tribunal dissolved. Many fear they will lose their seats if the inquiry is allowed to be carried out.

Karzai’s office has not confirmed the delay in the opening of Parliament, AFP reported.

The United States wants the Afghan Parliament to open, it

The U.S. and other international bodies have stressed their concercns over having a functioning legislature body in Afghanistan. “Afghanistan's peaceful future lies in the building up of robust democratic institutions based on the rule of law and clear respect for the separation of powers,” the United Nations mission in Afghanistan said in a statement last week.