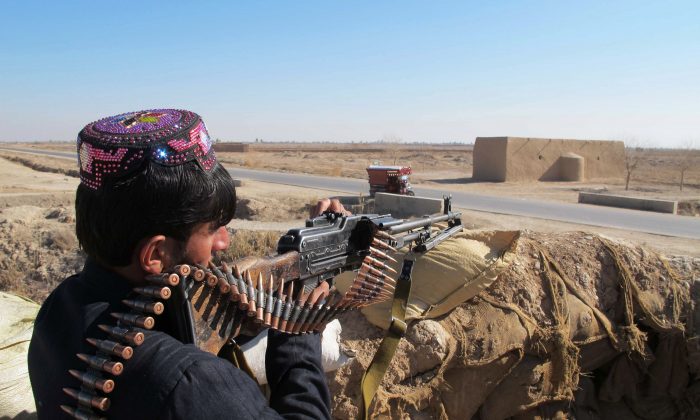 Sangin district had been besieged by the insurgents for weeks before an uptick in the ferocity of the fight this week sparked concerns it could fall to Taliban control.

But civilian and military officials said Sangin remained in government hands after the United States conducted two airstrikes overnight, and Afghan military helicopters dropped food and ammunition to soldiers and police who had been surrounded and trapped inside the district army base for days.

The presence of a small contingent of British troops, who arrived in the Shorab base—formerly Britain’s Camp Bastion during their Afghan combat mission—on Wednesday had helped boost morale of both civilians and security forces, officials said.

Overnight, the Taliban captured parts of the center of Sangin district around the district governor’s compound, but the Afghan forces, bolstered by reinforcements, soon succeeded in driving them further out, said Akhtar Muhammad, a police commander in Sangin.

“An hour later we recaptured that building and now we have it,” he said.

In recent days, the Taliban assault has threatened to overrun Sangin, a major poppy-growing area in Helmand, raising alarm that Afghan forces were too overstretched to fend off the insurgency. The Taliban this week pronounced they had seized control of the district, but the claim was widely refuted by Afghan officials.

As the military rushed more troops to the area, Afghan officials on Wednesday asked for the international military coalition’s help, including airstrikes.

Sangin is an important prize for the Taliban. It sits on crucial smuggling routes for drugs, arms and other contraband which fund the insurgency. Most of the world’s heroin is made from opium produced in Helmand’s poppy fields. Afghanistan’s opium output is worth up to $3 billion a year, much of it going to the Taliban which sponsors and polices its production and transport.

Shadi Khan, a tribal elder in Sangin who is also director of the Sangin District Council, said he was trapped in the Sangin army base for three days before government forces arrived.

“Taliban rumors that they have captured the district are not true,” he said.

Reinforcements were rushed to the region, the acting Defense Minister Masoom Stanekzai told reporters on Dec. 23, after the province’s deputy governor, Mohammad Jan Rasulyar, used his Facebook account to plead for help from central authorities. He said the entire province was in danger of falling to the Taliban.

Air drops of food and ammunition helped boost the defense, said Javid Faisal, deputy spokesman for Chief Executive Abdullah Abdullah. Roads around the district center had been mined by the insurgents, he said, adding that “at no time did Sangin fall, Sangin is not going to fall.”

Sangin is an important prize for the Taliban. It sits on crucial smuggling routes for drugs, arms and other contraband which fund the insurgency.

He conceded that many important districts in Helmand had been under prolonged Taliban attack, including Khanshin on the Pakistan border and Marjah, and that the provincial capital Lashkar Gah had also been targeted by the insurgents.

He said plans to push back in Sangin had been in preparation for some time, but the government had to prioritize its military assets as the Taliban had been fighting across all corners of the country since the drawdown of the international combat mission last year.

Helmand-based civil society activist Sardar Mohammad Hamdard said that at least 200 civilians had been killed or wounded in Sangin in the recent fighting. He said 12 members of the same family were killed by a roadside bomb as they were driving out of the district earlier this week, and rocket fire had landed on a house killing 17 people, including 10 children.

“It is both the government and the Taliban who are doing the killing,” Hamdard said.

The Taliban issued a statement on Dec. 24 laying out conditions for a peace dialogue to end the war, now in its 14th year. Talk of a dialogue between the Kabul government and the insurgents has resurfaced following a regional conference in the Pakistani capital earlier this month where hopes were raised that a process that was cancelled over the summer could be revived in 2016.

The announcement in July that the Taliban founder and leader, Mullah Mohammad Omar, had been dead for more than two years saw the group pull out of a dialogue process after only one meeting in Pakistan between representatives of each side. It also led to deep fissures in the group’s leadership, further muddying the waters about just who the Afghan government should be talking to when the time comes.

The Taliban statement listed barriers to peace negotiations, including United Nations sanctions on individual Taliban figures which were extended this week, and the presence of foreign troops in Afghanistan, with specific mention of the British troops that arrived in Helmand on Wednesday to provide support for Afghan forces battling in Sangin.

Political analyst Waheed Muzhda, formerly an official in the Taliban’s 1996-2001 administration, said the Taliban needed to sort out its leadership problems before it started talking about the peace process. Mullah Akhtar Mansoor, who was Mullah Omar’s deputy and took his place in August, has been locked in an increasingly violent dispute over the legitimacy of his position.

“This is an issue that has to be clear in the negotiating process,” Muzhda said.