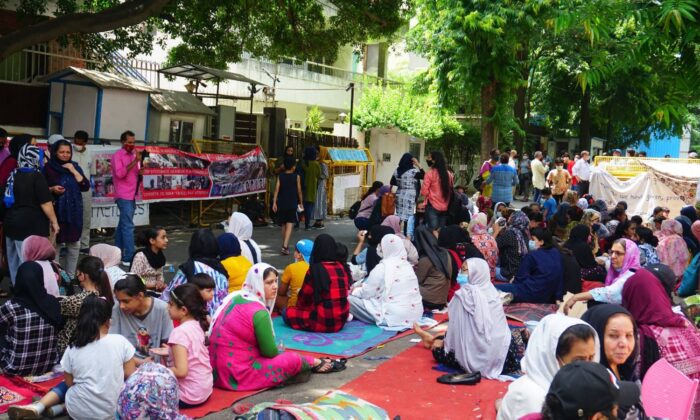 Afghan woman protestors outside the UNHCR office in New Delhi on Aug. 27, 2021. On protest at the site since Aug. 22, they are demanding reopening of closed cases and fast tracking of resettlement. (Naimisha)
International

NEW DELHI—Mohamad Qais Malikzada, 41, has been in India for more than six years with his wife and three children. During that time, he has been waiting for refugee status from the U.N. High Commission for Refugees (UNHCR), which he claims will allow him to immigrate to either the United States or Canada, where he has relatives.

He has been one of the thousands protesting outside UNHCR’s office in New Delhi since Aug. 22, demanding that the closed cases of Afghan asylum-seekers be opened without “conditions and regulation,” that refugee cards issued to long-pending cases, and that permanent resettlement in other countries be fast-tracked.

Like Malikzada, there are 15,467 Afghan refugees and asylum-seekers registered with the UNHCR’s mission in India as of July 2021, according to Kiri Atri, assistant external relations officer of the mission.

The Taliban takeover in Afghanistan, including the targeted killings and the explosions at the Kabul airport on Aug. 26, has rekindled painful memories for the protestors who say they fled their country due to similar situations. They now have no hope of ever returning home.

Fawzia, 45, fled Afghanistan 11 years ago after her husband, who was a doctor, was kidnapped and killed by the Taliban along with four others in Char Darah Kunduz, a district in Afghanistan’s Kunduz Province.

“He was kidnapped during his night duty. They first killed his guard, then picked him away. Their bodies were found on the roadside in Khana Badlu,” she told The Epoch Times. “Out of fear, I fled Afghanistan and came to India on a tourist visa, and in five to six months, I got my refugee card.”

Since the Kabul airport explosion that killed at least 175 people, Fawzia hasn’t been able to reach her family, including her younger son, who has been stranded in the city of Mazare-Sharif since the Taliban took over.

When The Epoch Times visited the protest site last week, the men and the women were segregated, while children played around. Some Afghan women sat fanning themselves while others sipped Afghan chai and Fawzia distributed Afghan naan bread.

Malikzada sat with Afghan men on one end of the road opposite the UNHRC office. He had to flee Afghanistan after his parents and siblings migrated to the United States and the Taliban began to target him in retaliation.

“So I went to Tajikistan, and I was there for a few years,” he said. “When I came back to Afghanistan, I thought that maybe that problem would be finished. After one month, [when] I was in my uncle’s house, they targeted my uncle. Then I escaped with my family to India.”

He applied for refugee status with the UNHCR and emailed them a sponsorship letter from his parents in 2015, but he is still waiting for an answer.

Ezaat Habibi, 57, fled Afghanistan 14 years ago and got a refugee status ID card from the UNHRC within two years. Habibi, who knows Hindi and Persian, earned his living as a translator for Afghan nationals visiting Indian hospitals. Since the Taliban took over Kabul, all flights have been suspended, and he has lost his job.

Afghans prefer Indian hospitals for quality and affordable medical care, particularly hospitals in Delhi, as a flight from Kabul to Delhi is just two hours. Every year, more than 30,000 medical visas are issued to Afghans, and the estimated loss to Indian medical tourism because of the current uncertainty in Afghanistan is $1.5 billion to $2 billion, according to India Times.

Many Afghan asylum-seekers and refugees like Habibi were employed by this industry.

“Our life was going on. We were getting a meal or two, and our children were studying. We still had a hope to go back home. We had a home in Kabul. But now our hopes are shattered,” said Habibi. “Since the situation deteriorated, we are so worried about how we will live in India.

“We don’t have many opportunities for work here. It’s very difficult for refugees to get jobs here. … People become fearful when they know we are Afghanis.”

Like Habibi, Fawzia also lost her job as a translator and hasn’t been able to pay her son’s school fees for four months.

“Now everything is closed, flights are closed. We are really stressed and worried. We have nothing. My mother used to send me money to help me pay my house’s rent in New Delhi. Now even banking has closed. Nobody is coming, so she can’t even send me some money through someone. Our situation is really bad,” said Fawzia, adding that the family is now depending on her daughter’s meager salary.

There were others among the protestors who had lost jobs, as most of them worked in tourism-based businesses like restaurants, hotels, and guesthouses run by the Afghans in New Delhi, which were either shut down due to the pandemic or closed after the tourist inflow stopped from Afghanistan.

“I had a restaurant here in Jangpura, but due to this problem of COVID-19, it also closed. I sold that and lived on that money, and it’s finished now. I became zero, and nowadays I have support from my father,” said Malikzada.

“He’s sending some money from America. But he’s an old man now. He can’t support me. This is the time that I should support him, but still, he’s supporting me.”

Atri told The Epoch Times that there were 20.7 million refugees of concern to UNHCR around the world at the end of 2020, but less than 1 percent of refugees are resettled each year, and this depends upon the resettlement quotas fixed by participating countries.

The Indian government as per an order by its Ministry of Home Affairs on Aug. 17 is granting an extension of residency permits as well as short-term visas to certain categories of Afghan nationals staying in India “due to disturbed conditions in that country.”

Since the recent development in Afghanistan, the UNHCR has also provided more assistance to Afghan refugees and asylum-seekers in India through both food and non-food support, particularly for the most vulnerable category, Atri said.

However, the UNHCR didn’t clearly answer how many are in that category, and how this will be scaled up to address the current crisis.