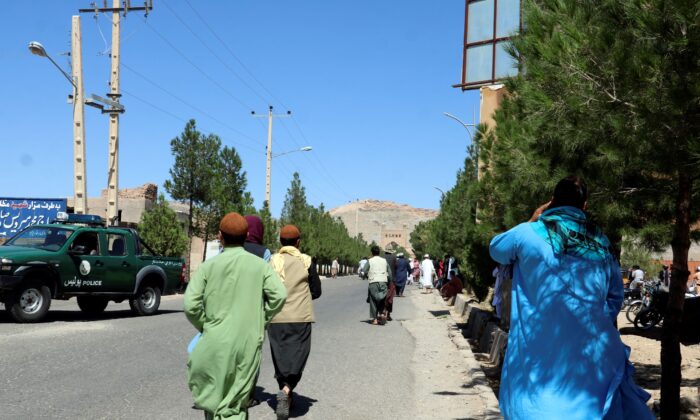 Afghan people run near the site of an explosion in Herat province, Afghanistan, on Sept. 2, 2022. (Omid Haqjoo/AP Photo)
Afghanistan

HERAT, Afghanistan—An explosion tore through a crowded mosque in western Afghanistan, killing at least 18 people. including a prominent cleric close to the Taliban, Taliban representatives and a local medic said. At least 23 people were hurt.

The explosion in the city of Herat on Sept. 2 left the courtyard of the Guzargah Mosque littered with bodies, the ground stained with blood, video from the scene showed.

The bomb went off during Friday noon prayers, when mosques are full of worshipers.

Among the dead was Mujib-ul Rahman Ansari, a prominent cleric who was known across Afghanistan for his criticism of the country’s Western-backed governments over the past two decades. Ansari was seen as close to the Taliban terrorist group, who seized control over Afghanistan a year ago as foreign forces withdrew.

His death was confirmed by the chief Taliban spokesman, Zabihullah Mujahid. Just before the bombing, Ansari had been meeting in another part of the city with the Taliban’s deputy prime minister, Mullah Abdul Ghani Baradar, who was on a visit to Herat. Ansari had rushed from the meeting to the mosque, an aide to Baradar said in a tweet.

Ansari’s brother, Habib ul Rahman, was also among those killed, according to Islam Jar, the governor of Herat province. Jar said another 23 people were wounded in the attack, updating an earlier toll.

There was no immediate claim of responsibility for Friday’s blast.

Last month, a bombing at a mosque in the capital Kabul targeted and killed a pro-Taliban cleric in an attack claimed by the ISIS terrorist group. ISIS has waged a bloody campaign of attacks on Taliban targets and minority groups, particularly Shiites whom the extremist Sunni ISIS considers heretics. It has frequently hit mosques with suicide attacks during Friday prayers.

Herat’s Guzargah Mosque, where Ansari has long been the preacher, draws followers of Sunni Islam, the dominant stream in Afghanistan that is also followed by the Taliban.

Ansari was for years a thorn in the side of Afghanistan’s pro-Western government. In his sermons at the Guzargah, he urged his many supporters to carry out protests against the governments and preached against women’s rights.

The Saudi-based body of Muslim states “remains gravely concerned that sporadic attacks and explosions in various provinces across the country continue to mar the security and social peace of Afghan people,” it said in a statement. “The OIC renews its resolute solidarity with Afghanistan and its long-suffering people.”