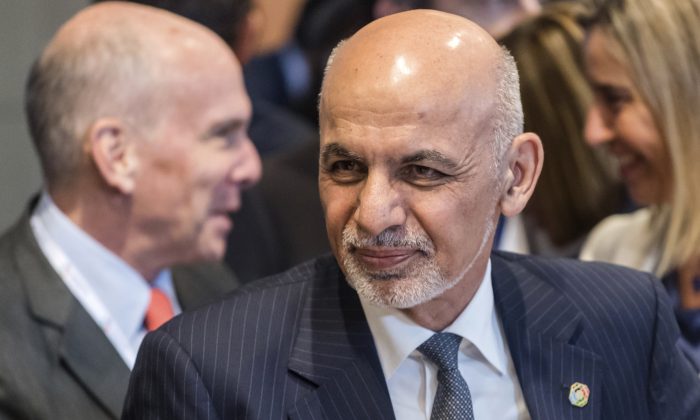 Afghanistan's President Ashraf Ghani arrives for a Conference on Afghanistan in Brussels, Wednesday, Oct. 5, 2016. The two-day conference, hosted by the EU, will have the participation of over 70 countries to discuss the current situation in Afghanistan. (AP Photo/Geert Vanden Wijngaert)
International

“We are facing social collapse,” Ghani told representatives from more than 70 nations and dozens of agencies and non-governmental organizations gathered in Brussels to try to drum up billions of dollars to keep the Afghan government afloat.

“We are going to be relentlessly focused on reduction and elimination of poverty as our central task,” he said, noting that 39 percent of the Afghan population lives on less than $1.35 a day.

But donor fatigue has grown over the 15 years of international efforts in Afghanistan since a U.S.-led coalition ousted the Taliban for harboring former al-Qaida leader Osama bin Laden. The European Union, hosting the conference, has been struggling to raise around $3 billion that Kabul will need each year. The last donor conference, in Tokyo in 2012, secured $4 billion in annual subsidies for development.

The Taliban have proved tenacious, waging an increasingly powerful insurgency around the country. Afghan forces battled Taliban fighters in the northern city of Kunduz for the third straight day on Wednesday and American helicopters provided air support to troops on the ground in the wake of the multipronged attack on the city launched by insurgents this week.

Despite the setbacks, and rampant corruption, U.N. Secretary General Ban Ki-moon said that “it’s important today that the international community sends a strong message of support.”

Afghanistan’s leaders “have been making impressive reforms and development plans to change the lives of people that have been suffering too long,” Ban said.

Acknowledging the many setbacks that Afghanistan has faced, U.S. Secretary of State John Kerry said that he still has “an enormous sense of confidence about the future.”

“Year by year our shared effort, one of the largest international coalitions every assembled, and maintained over a sustained period in time, is in fact yielding encouraging dividends,” Kerry told the representatives.

The EU’s foreign policy chief, Federica Mogherini, said the EU and its member states will pledge 1.2 billion euros ($1.3 billion) each year up until 2020 “and we would expect a similar level of engagement from our partners.”

“We all need to commit to a new deal for Afghanistan,” Mogherini said as she opened the meeting.

In earlier comments to reporters, she denied reports the bloc is making aid conditional on Afghanistan taking back people who have fled to Europe, saying there is “never a link between our development aid and what we do on migration.”

Afghan Foreign Minister Salahuddin Rabbani said the Brussels conference would give his government an opportunity to present its reform blueprint. He stressed its commitment to fighting corruption and advancing women’s rights.

“Our achievements are many and Afghanistan is advancing on a positive trajectory,” Rabbani said. “Yet our challenges remain formidable.”

Afghanistan has been mired in conflict for decades. At the height of the 15-year U.S. and NATO intervention, billions of dollars flowed into the country, creating a false economy with double-digit growth. But the drawdown of troops in 2014 led many aid workers and international agencies to depart or scale back their operations, causing the economy to all but collapse.

Officials estimate up to 50 percent unemployment. Deteriorating security deters foreign investment in key fields such as mining and infrastructure, and drives the country’s youth onto the migrant trail to Europe in search of opportunities. Afghan President Ashraf Ghani will nevertheless argue that progress has been made since Tokyo regarding corruption and judicial and electoral reform.