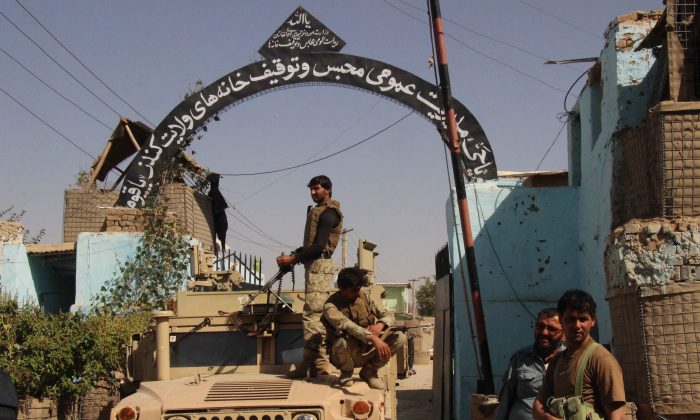 In this photograph taken on October 8, 2015, Afghan security forces stand guard at the main gate of the prison (on which it is written "General Directorate of Prison Centre of Kunduz Province) after retaking Kunduz from the Taliban, in Kunduz. Thirty-three people are still missing five days after a US air strike on an Afghan hospital, Doctors Without Borders warned, sparking fears the death toll could rise significantly. AFP PHOTO / Nasir WAQIF (Photo credit should read NASIR WAQIF/AFP/Getty Images)
Middle East

KABUL, Afghanistan—Supporters of the Islamic State group (ISIS) in Afghanistan are attempting to establish a regional base in the eastern city of Jalalabad, the commander of U.S. and NATO forces in Afghanistan, General John Campbell, said on Tuesday, Dec. 15.

Campbell said that foreign fighters from Syria and Iraq had joined Afghans who had declared loyalty to the group in the eastern province of Nangarhar.

He said there were also indications that the ISIS supporters in Nangarhar were trying to consolidate links with the group’s leadership in Syria and Iraq.

ISIS controls about a third of Iraq and Syria. Fighters loyal to the group in Afghanistan include disaffected Afghan and Pakistani Taliban who have fought fierce battles with the Taliban in recent months.

Afghan officials have said that ISIS supporters control a number of border districts in Nangarhar and have a presence in some other southern provinces, including Zabul and Ghazni.

Until now, however, it was unclear whether loyalists in Afghanistan had institutional links to the group’s leadership.

Many of those who had declared allegiance to ISIS were “disenfranchised Taliban” from both sides of the border, Campbell said. But he added: “They’ve been reaching out. I’m sure there are folks who have come from Syria and Iraq—I couldn’t tell you how many, but there are indications of some foreign fighters coming in there.

They don’t have the capability right now to attack Europe or attack the United States. But that’s what they want to do.
— John Campbell, U.S. general

During the summer months, Taliban and ISIS loyalists fought fierce battles in the far eastern districts of Nangarhar, with residents reporting a range of atrocities, including arbitrary imprisonment, forced marriages for young women, and beheadings.

The ISIS loyalists have said they want to absorb Afghanistan into a larger province of its “caliphate” called Khorasan. Campbell said the group wants to establish a base in Nangarhar’s provincial capital, Jalalabad “as the base of the Khorasan Province” and “work their way up into Kunar” Province immediately north.

The first credible reports of an ISIS presence in Afghanistan emerged earlier this year in northern Helmand, though recruiters believed to have had links to the leadership in Syria were killed by U.S. drone strikes in February.

The presence in Nangarhar became clear in the summer, when ISIS loyalists launched battles against the Taliban in the border regions. For months, the Afghan forces—occupied with fighting elsewhere—had let the two groups fight each other, Campbell said. “If the Taliban and ISIL want to kill each other, let them do it,” he said, using an alternative acronym for the Islamic State group.

He said that control of the four districts—Achin, Nazyan, Bati Kot, and Spin Gar—had seesawed between the two groups.

The revelation in July that the Taliban’s founder and leader, Mullah Mohammad Omar, had been dead for more than two years has led to deep fissures in the leadership and infighting between rival Taliban factions that Campbell said had left hundreds dead.

Campbell, who took control of U.S. and NATO forces in Afghanistan in mid-2014, said splits among the Taliban, who have been trying to overthrow the Afghan government since their regime was driven from power in 2001 by the U.S. invasion, could make the fight even harder in 2016.

“The prize really is Kandahar—that’s their strategic goal,” he said, referring to the southern province from where the Taliban emerged after Afghanistan’s vicious civil war ended in 1996.

Neighboring Helmand Province, where most of the world’s opium is produced, is currently the scene of fierce battles for control of strategically important districts, including Marjah.

Taliban fighters took control of the northern city of Kunduz in September for just three days before the Afghan military, backed by U.S. forces, pushed them out.

Campbell said he did not believe the Taliban had planned to hold or govern Kunduz, but the psychological impact of the city’s fall had been enormous. Jalalabad, he said, “is not going to fall.”

Afghan forces, “challenged in many areas, understand the impact of Kunduz,” he said. “I think they will make the right adjustments so that it [Jalalabad] doesn’t become another Kunduz.”