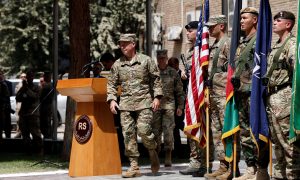 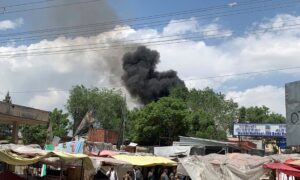 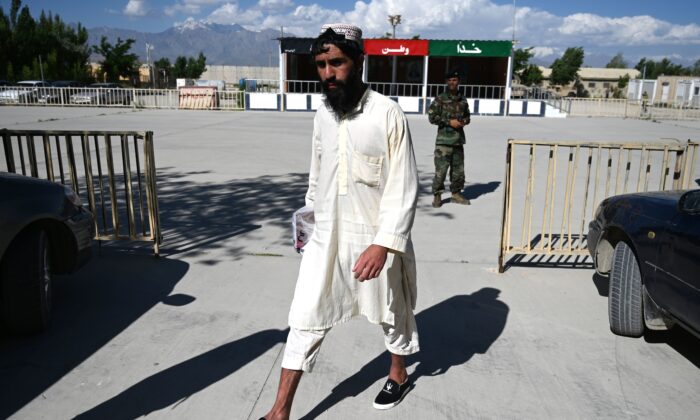 A Taliban prisoner walks during his release from the Bagram prison, next to the US military base in Bagram, some 50 km north of Kabul on May 26, 2020. (Wakil Kohsar/AFP via Getty Images)
Middle East

KABUL, Afghanistan—The Afghan government released hundreds of Taliban prisoners May 26, its single largest prisoner release since the United States and the Taliban signed a peace deal earlier this year that spells out an exchange of detainees between the warring sides.

The government announced it would release 900 Taliban prisoners as a three-day cease-fire with the insurgents draws to an end. The Taliban had called for the truce during the Muslim holiday of Eid al-Fitr, which marks the end of the Islamic holy month of Ramadan.

There were expectations that the prisoner release could lead to new reductions in violence, and Taliban officials were considering an extension of the cease-fire, a senior Taliban figure confirmed to The Associated Press.

“If these developments, like the announcement of prisoner releases, continues, it is possible to move forward with decisions like extending the brief cease-fire and to move in a positive direction with some minor issues,” the Taliban official said.

The prisoners were being released from Bagram prison, where the United States still maintains a major military base north of Kabul, and from Pul-e-Charkhi prison on the eastern edge of the Afghan capital.

By late afternoon, the AP witnessed scores of men pouring out of the Bagram compound, presumably released prisoners. It wasn’t immediately possible to verify their numbers or whether they were all Taliban members. They were transported on six buses parked outside the prison.

An official at Bagram said 525 men were to be released but he spoke on condition of anonymity because he wasn’t authorized to speak to the media.

No number was given for how many prisoners would be released from Pul-e-Charkhi.

In a tweet, late May 26, Taliban political spokesman Suhail Shaheen in Doha said the insurgent group planned to release “a remarkable number” of government prisoners. He called the Afghan government’s release of 900 “good progress.”

The prisoner release is part of the U.S. deal with the Taliban, signed on Feb. 29, to allow for the eventual withdrawal of U.S. and NATO troops from Afghanistan, bringing to an end the country’s protracted war and America’s longest military involvement.

When the deal was signed, it was touted as Afghanistan’s best chance for peace after decades of war. But political feuding in Kabul and delays in prisoner exchanges have slowed the deal’s progress toward intra-Afghan negotiations, considered the second and most critical phase of the accord.

Under the deal, Kabul is to release 5,000 Taliban prisoners while the insurgents are to free 1,000 captives, mostly government officials and Afghan forces, before intra-Afghan negotiations can begin.

Javid Faisal, a national security spokesman in Kabul, urged the Taliban to extend the cease-fire and said the government would release 900 prisoners May 26. That would bring to 2,000 the number of Taliban prisoners released so far under the U.S.–Taliban deal. The Taliban say they have released 240 captives.

However, the Taliban have yet to confirm whether those released so far by the government were among the 5,000 names the insurgents had given U.S. negotiator Zalmay Khalilzad, the architect of the Feb. 29 deal.

A second Taliban official told the AP that those released so far were on the Taliban list, including the uncle of Taliban chief Hibatullah Akhundzada. Key in deciding which names would appear on the list was Mullah Nooruddin Turabi, a senior figure who had recently recovered from COVID-19, the illness caused by the CCP (Chinese Communist Party) virus, commonly known as the novel coronavirus.

Turabi was the much-feared vice and virtue minister during the Taliban’s rule, known for beating men who were found listening to music or not attending mosque. He once slapped a Taliban commander who spoke with a woman journalist.

Both Taliban officials spoke to the AP on condition of anonymity because they weren’t authorized to talk to reporters.

Many Afghans have expressed frustration at the slow and often stalled peace process. Many have known only conflict in their homeland for the past several decades.

“If both sides stop this war and sit at the negotiating table … maybe my youngest children will experience a good life, which we never experienced,” said Sayed Agha, a truck driver from eastern Logar province.

Agha, 45, was wounded in April, caught in cross-fire during a battle between the Taliban and Afghan soldiers.

“I have spent my whole life in war,” he said.