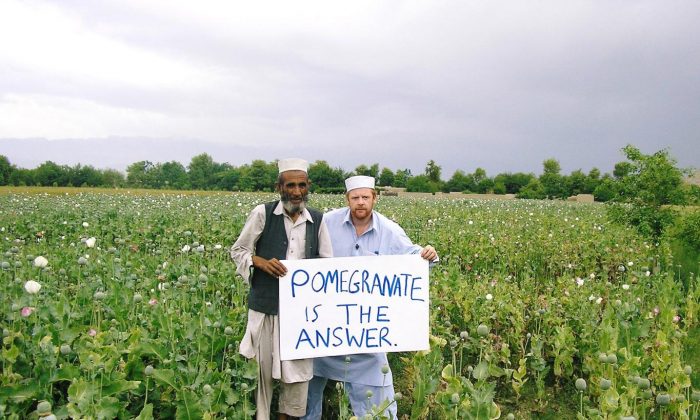 During his first visit to Afghanistan in 2007, James Brett walked into a poppy field to convince a farmer to switch to pomegranates. (Courtesy of Plant For Peace)
Business & Economy

Plant for Peace, founded by a British businessman James Brett in 2007, is an initiative designed to assist smallholder farmers in Afghanistan. The charity provides training as well as saplings to Afghan families to replace their opium poppy fields with pomegranates.

“I wanted to create a sustainable model that would enable those families to not only just survive but actually thrive. The outcome of this thought was Plant for Peace” said Brett.

I wanted to create a sustainable model that would enable those families to not only just survive but actually thrive.
— James Brett

Using the Afghan pomegranates, Plant for Peace turns the fruits into powder form and produces organic yogurt coated fruit bars. A company formed for this purpose, has been selling “Plant for Peace” labeled fruit bars in the U.K. since May.

Brett has attracted a few prominent names to his charity including army generals, entrepreneurs, professors, as well as the princess of Jordan, Basma bint Ali. He also received support from the U.S. government to plant 1.9 million trees in Afghanistan.

Brett, who is married to an Armenian, lives in Armenia but spends almost 60 percent of his time in Afghanistan. He speaks some Dari and can now understand about 40 percent of conversations. He said he doesn’t experience security problems because of his good relations with tribal elders.

His story with pomegranate first started during his business trip to Northern Pakistan in 1999. “It was really a hot day. I saw a nomad selling fruit juices on the street. I asked him to blend some pomegranates,” he said.

By the time he finished drinking the juice, he had fallen in love with the taste. He decided to turn that into a business. He co-founded the brand called PomeGreat in 2002, which was the first pomegranate juice drink in the U.K.

He was surprised to learn Afghanistan grew the best pomegranates in the world. “I had the idea of creating an industry that would enable Afghan farmers to move away from conflict and opium production” said Brett.

However, his dream was interrupted by a nervous breakdown in 2004. He lost his business as a result. He ended up in a psychiatric hospital. “A childhood trauma kicked in and I needed to address some issues,” said Brett.

After staying in a psychiatric hospital for two years, he started to reconnect with the outer world.

His early years included a lot of tragic events including child abuse by his grandfather, early death of his mother, subsequent decline into drug addiction, homelessness, and prison.

After staying in a psychiatric hospital for two years, he started to reconnect with the outer world. His life changed in 2007, with an invitation to speak at a farming conference in Afghanistan.

Upon arriving in Afghanistan, he was shocked with the scene of red and white poppies everywhere. About half a million households were growing the plants. On his way back to the airport, he got out of the car, walked into a poppy field and with the help of his translator convinced a farmer to switch to pomegranates.

This was the first step toward the realization of the Plant for Peace initiative. Brett believed he could convince Afghan farmers by helping them sell their products to international markets.

He started traveling to Afghanistan frequently to hold meetings with influential local people. He held a series of meetings called “jirga” with tribal elders. He has reached more than 55,000 elders across the country to build trust and get support for his initiative.

He helped plant 40,000 pomegranate trees in 2009 mainly through his own financial resources. The following year, the Plant for Peace Foundation trained 800 farmers and helped them plant 105,000 new trees.

A donor, who prefers to stay anonymous, has helped the charity employ a team of international experts and develop a strategy.

Plant for Peace has established a company to produce fruit bars with over 70 percent of the ingredients purchased from Afghan farmers. The bars are produced in Austria and sold in U.K. chains like Waitrose and Holland & Barrett. The charity wants to extend this initiative to other product lines and markets like the United States.

According to Brett, a solid product can only have 2 or 3 percent of pomegranate in it, as a high level of moist increases the risk of bacteria. In order to solve this problem, he personally developed a process to turn pomegranates into a powder form. It took 1.5 years to develop the product. The process enables the fruit bar range to consist of at least 20 percent pomegranate and 50 percent mulberry all from Afghanistan.

Plant for Peace recently launched a new campaign. for every fruit bar sold, it donates a tree to the Afghan farming community. Buying a single Plant for Peace fruit bar equals a $350 donation to an Afghan farmer over the next 35 years, which is the average life of a tree.

Afghanistan produces 85 percent of world’s opium according to a report by United Nations Office on Drugs and Crime. Initiatives like Plant for Peace offer an attractive solution for tackling the illegal drug trade and creating a sustainable economic alternative for local communities.