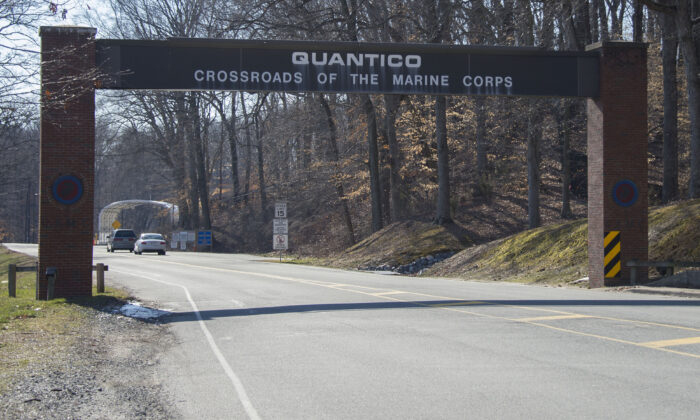 The main gate of the U.S. Marine Corps Base in Quantico, Va., in a file image. (Jim Watson/AFP via Getty Images)
Crime and Incidents

An Afghan national who helped U.S. troops in his home country has been convicted of molesting a 3-year-old girl at a Marine Corps refugee camp in Virginia.

Mohammed Tariq, 24, was convicted by a federal jury on charges of abusive sexual contact, the Department of Justice announced this week.

Tariq was spotted on Sept. 22 around 9:10 p.m. by four Marines sexually touching the young girl, according to court documents.

The girl tried pushing Tariq away but he grabbed her arm and forced her to stay where she was, prompting the Marines to intervene and detain Tariq.

The incident took place at Camp Upshur, on Marine Corps Base Quantico.

The girl and Tariq are not related, officials say, though both he and the girl, along with her family, were recently evacuated from Afghanistan and brought to the United States.

U.S. troops and allies evacuated over 100,000 Afghans before withdrawing from Afghanistan last year.

Tariq faces up to life in prison. He will be sentenced on April 26.

Public defenders representing the defendant did not respond to a request for comment.

The lawyers said in an earlier filing that their client has “no English language comprehension” and is unable to “read or write in any language.”

They asked a judge to suppress statements made by Tariq because, they alleged, he did not mean to waive his Miranda rights, or right to remain silent.

The government opposed the motion, asserting the defendant was advised of his rights and that, through a translator, he said in response to basic identifying questions that molesting small children “was part of his culture and that there was nothing wrong.”

The court denied the motion to suppress and Tariq was ultimately convicted.

“This case is indicative of law enforcement’s commitment to ensure the safety of immigrant and refugee members of our community,” Jessica Aber, the U.S. attorney for the Eastern District of Virginia, said in a statement.

“People who come to our country seeking haven from tyranny and terrorism deserve to live here in safety. I want to thank the Marines and the FBI for their commitment to upholding that ideal. It is the resilience and courage of the victim and her family in speaking out against this offender that is truly emblematic of the contributions refugees and immigrants make to our country,” she added.

The case was investigated by the FBI’s Child Exploitation and Human Trafficking Task Force and brought as part of Project Safe Childhood, a nationwide effort to combat the sexual exploitation and abuse of children.