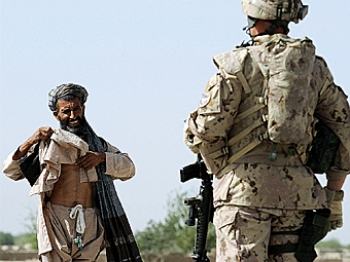 A Canadian soldier with the NATO-led International Security Assistance Force (ISAF) stops an Afghan passer-by during a patrol in Panjwayi district, some 30 kms west of Kandahar province earlier this year. The deaths of two children have brought Canadian s (Shah Marai/AFP/Getty Images)
International

It’s a “horrible decision” to make in “horrible circumstances,” said Defence Minister Peter MacKay on Parliament Hill earlier this week after Canadian soldiers opened fire on a car driving toward their convoy on Sunday, killing a 2-year-old boy and his 4-year-old sister.

Canadian Forces and NATO released statements saying the troops opened fire after the driver ignored repeated signals to stop and drove within 10 metres of their convoy. It’s a tactic used frequently by Taliban militants.

The NATO coalition has established rules of engagement (ROEs), which offer guidelines on when to fire at an enemy target but the final decision rests with the soldier, said Dr. Walter Dorn, a professor of defence studies at the Canadian Forces College and an expert on peacekeeping and reconstruction.

“However if the soldier deems that his life is at risk, there’s an inalienable right of self-protection. So they leave a lot up to the soldiers as to when they can pull the trigger.”

ROEs can change with time. Depending on the seriousness of the situation on the ground they can become more permissive or restrictive.

“If the host country, in this case Afghanistan, is making a lot of complaints that there are too many fatalities, then that can make a shift in the ROEs,” explained Dorn.

President Karzai has already complained that NATO forces were using excessive force and causing too many civilian casualties.

In 2007, civilian casualties amounted to approximately half the number of insurgents killed. According to Human Rights Watch, 434 civilians were killed by coalition forces, compared to roughly around 900 Taliban fatalities.

“It causes huge resentment. [The people of Afghanistan] say, ‘Here, the people are trying to save us but they’re actually killing us,’” said Dr. Dorn.

The Taliban and other terrorist groups use these NATO failures to brand coalition forces as deadly occupiers who do not care for the wellbeing of Afghan people.

Dorn believes that in order to prevent negative fallout from Sunday’s killing, a repeat must be avoided and the Canadian Forces investigation into the matter should be open and transparent.

“We have to investigate and make sure that it wasn’t due to soldiers who were making improper judgments,” said Dorn.

“In the past we’ve had reports from the CF about their version of events, and then it was not corroborated by what the locals were saying […] We have to make sure that we are giving the complete truth out of this and I think for that purpose it’s good to have openness, transparency and accountability through third-party investigations, which would include UN investigations.”

Due to the ongoing investigation, Canadian Forces said they were unable to comment.