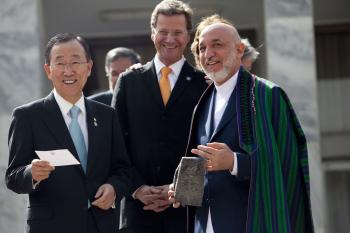 Stephen Jones
View profile
Follow
biggersmaller
Print
An international conference in Kabul has endorsed a plan for Afghan forces to take the lead in securing the country by 2014.

Afghan President Hamid Karzai renewed his pledge to lead the country in securing itself from insurgent groups.

“I remain determined that our Afghan national security forces will be responsible for all military and law enforcement operations throughout our country by 2014,” Mr. Karzai told the conference.

Representatives from 70 countries attended the one-day conference in the Afghan capital of Kabul, including Hillary Clinton, U.S. secretary of state.

United Nations Secretary-General Ban Ki-moon, who co-hosted the conference, said that there had never been a more concrete vision for Afghanistan’s future.

The resolution from the conference promised to increase the amount of foreign aid channeled through the Afghan government from 20 to 50 percent.

Karzai, whose government has been accused of corruption, had previously lobbied for more.

"We're training the Afghan army month by month and it's actually on target," he said in Washington ahead of talks with U.S. President Barack Obama.

However, NATO Secretary-General Anders Fogh Rasmussen said that the handover of security duties to Afghan forces would be based on "conditions, not calendars."

“Our mission will end when, but only when, the Afghans are able to maintain security on their own,” he said.

Associated Press reported that rocket fire at Kabul airport caused a plane carrying Ban Ki-moon and the Swiss foreign minister to be diverted.