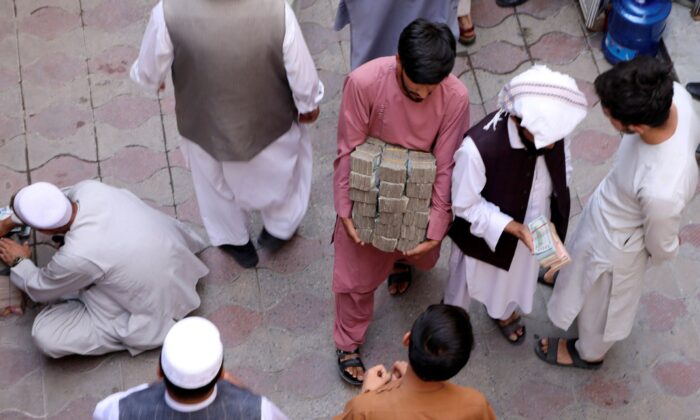 An Afghan money exchange dealer carries bundles of banknotes at an exchange market, following banks and markets reopening after the Taliban took over in Kabul, Afghanistan, on Sept. 4, 2021. (Stringer/Reuters)
Afghanistan

The Afghan central bank was drained of the majority of its U.S. dollar cash reserves in the weeks before the Taliban takeover of Kabul, according to an assessment prepared for the country’s international donors.

Afghanistan’s severe cash shortage began before the Taliban terrorist group seized control of Kabul, according to a confidential, two-page brief, obtained by Reuters. The document was written earlier this month by senior international economic officials for institutions including the World Bank and International Monetary Fund (IMF).

The brief criticized how the central bank’s former leadership handled the crisis in the months leading up to the Taliban takeover. This included decisions to auction unusually large amounts of U.S. dollars and move money from Kabul to provincial branches, increasing the sum kept in these branches from $12.9 million in 2019 to around $202 million by the end of last year. Some of that money ended up getting stolen, the report said, without specifying how much.

“FX (foreign exchange) reserves in CB’s (central bank) vaults in Kabul have depleted, the CB cannot meet … cash requests,” the report said, according to the news wire. “The biggest source of the problem is the mismanagement at the central bank prior to the Taliban takeover.”

Shah Mehrabi, chairman of the central bank’s audit committee, who held his post following the Taliban takeover, defended the central bank’s handling of the crisis, saying that leadership was working to prevent a run on the local Afghani currency.

The extent of the cash shortage can be seen on the streets of Afghan cities, where people have been queuing for hours to withdraw dollar savings amid strict limits on how much they can take out.

The economy was struggling prior to the Taliban takeover on Aug. 15, but the return of the terrorist group and abrupt end of billions of dollars in foreign aid has left it in deep crisis.

Shortly after the Taliban seized control, the IMF and World Bank suspended the country’s access to global financial resources amid uncertainty over recognizing the Islamic militant group as Afghanistan’s legitimate government.

The World Bank at the time cited concern about the “impact on the country’s development prospects, especially for women.” Separately, the Biden administration in August froze Afghan government reserves held in U.S. bank accounts, blocking the Taliban from accessing billions of dollars, the Washington Post first reported.

Deborah Lyons, the U.N. secretary-general’s special representative for Afghanistan, warned earlier this month of an imminent economic collapse unless frozen funds are released to the country.

“The economy must be allowed to breathe for a few more months, giving the Taliban a chance to demonstrate flexibility and a genuine will to do things differently this time, notably from a human rights, gender, and counter-terrorism perspective,” she said.