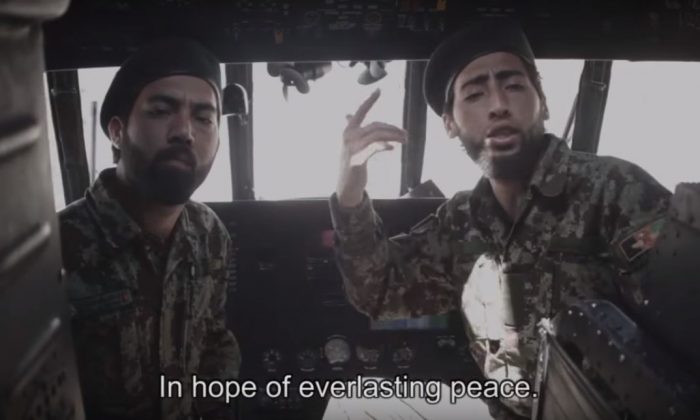 Rappers with the Afghan group FM Band sing in a new music video for the Afghan National Army, "Soldier." The hip-hop video is the new anthem for the Afghan military. (Sceenshot/FM Band)
Middle East

The Afghan National Army has a new anthem, in the form of a rap video written by the Afghan group FM Band (Farhad & Martin).

It features wide shots of the Aghan National Army, and the rappers singing on tanks, in helicopters, and wearing full military garb.

The video comes at a time when Afghan forces are defending their country against ISIS fighters, and are likely trying to reach out to younger recruits.

The lyrics include “I defend my homeland’s dignity, this is my duty against terrorists,” “We have been hurt by neighbors bullying, but now we have national army,” and “Our hearts want peace not war.”

The video, “Soldier,” features the Afghan rap group FM Band (Farhad & Martin), and ends with a special thanks to the Afghan Ministry of Defense.

This isn’t the first time Afghanistan has used a rap video for public relations. In 2014, three rap artists won a competition to write an anthem for Afghanistan’s elections. The contest was sponsored by groups including the nonpartisan United States Institute for Peace, and winners received $1,000.

The video from the male winners, Sami and Shaheed, had lyrics including “Go to the ballot boxes without any fear … the teenagers, youngsters, and widows are voting for their country.”

The female winner was the 18-year-old rapper and activist Sonita Alizadeh, who became well known globally in 2015 after moving to the United States, with her songs against forced marriages.