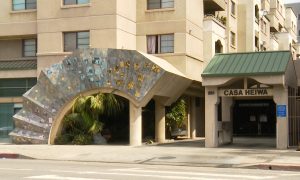 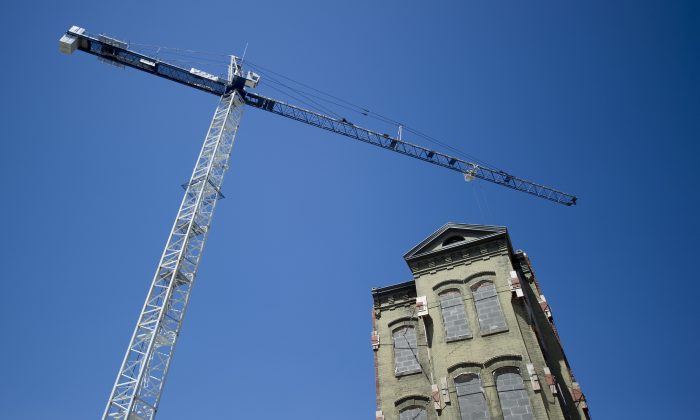 A giant crane stands near a historic building that is being incorporated into new construction in Washington, DC, on May 1, 2013. Affordable housing in the Washington, D.C. metropolitan area is turning into a real issue, according to an October Urban Institute report. (JIM WATSON/AFP/Getty Images)
US

Smart renters double up
By Heide B. Malhotra
biggersmaller
Print

Affordable housing in the Washington, D.C. metropolitan area is turning into a real issue, according to an October Urban Institute report. The Institute calls for rental housing that addresses the needs of those with a higher income, those of lower income, young professionals, and the elderly on a fixed income.

Rents near Metro areas have skyrocketed. In September the average listings at the Foggy Bottom stop was listed at $2,723, according to a RadPad, a rental website. Prices decrease if one lives further away from the Metro and chose an older building.

Rent for a studio apartment was $1,710 per month, while a 4 bedroom apartment was as high as $4,150 in October, according to the Zumper, a rental website.

“What does the future hold for the metro as nearly 24,000 units are still in development … rent growth to be flat to slightly negative through 2015,” said a recent Property Management Insider (PMI) report.

Income and Cost of Living at Issue

Wages have not kept pace with the cost of living. Among costs, rents have skyrocketed, making it very difficult to find a suitable home.

The cost of living is increasing consistently. The U.S. Consumer Price Index (CPI) increased by 1.7 percent over the past 12 months for all items, according to the latest BLS release.

“As rents rise and income growth remains flat in many areas, renters are increasingly forced to devote an ever-larger share of their monthly income towards rent,” said a Zillow Real Estate Research report in October.

Renters in the United States 2014 market use 29 percent of their income on rent, which is 5 percent higher than in 2000.

Rents in the United States increased by 3.5 percent on an annual basis, according to the Zillow third quarter Market Report.

“The housing recovery has come with some tough financial realities for renters. The bottom line: Rent is less affordable than ever, and incomes aren’t keeping up,” said a November report on the Zillow website.

Splitting the rent is one strategy to cope with rising rental cost. There are other strategies, such as moving to a lower cost rental market, moving back in with parents, renting a room or taking care of maintenance in an apartment complex. The latter one comes generally with free living in the complex.

However, the doubling up, or splitting the rent is becoming more and more popular than many of the other strategies. The benefits of splitting the rent make people more competitive. Two people could bid for a higher priced place in a prime location, something they could not afford on their own.

There is even a rent-splitting calculator on the Internet that allows the prospective renters to split the rent fairly.

The Splitwise website said that rooms are often of different size, have a bathroom with one but not the other room, is shared by a couple, may have none or different size windows and a have unequal closet size.

“It’s fair, because everyone pays for what they get, and saves money for anything they share,” said Splitwise.

Let the fingers do the hunting for a rental place, as well as paying rent. It took Zumper more than a year to develop tools that brings brokers, property manager and prospective tenants together, said Techcrunch (TC) in a September article.

Zumper began to develop an application with funds from capital investment groups, including Kleiner Perkins, Caufield & Byers, Greylock Partners and others. They raised $6.5 million in February 2014 and $1.7 million in 2012, according to the Zumper website.

TC said that the apps, named ZAPP, were rolled out this September. However, only in the San Francisco Bay area and will go nationwide sometimes during 2014.

For ease of checking out a prospective renter, Zumper partnered with Experian, which provides the credit scores at a highly discounted price of $10 through ZAPP. Besides, the credit score can be used for other rental applications at no further cost.

RadPad, another mobile application that opened shop in 2012 in California, connects property owners and prospective renters.

According to the builtinlosangeles website, RadPad raised $1 million in capital from private investors, including Deep Fork Capital. This came on top of having raised another $1 million during a prior year.

Helping to ease the process of paying the rent, RadPad announced this month that by using its Apple Pay program one could use a credit or debit care for paying rent. All one needs is to give the payment option and landlord information, and RadPad will do the walking for you. The company has included a few perks, such as lowering the credit card fee.

Not only the D.C. rental market, but all United States markets are in a constant flux. Given the financial down-times, the rental markets are adjusting remarkably, finding ways to compensate for shortcomings and easing the pain of having to rent instead of own.