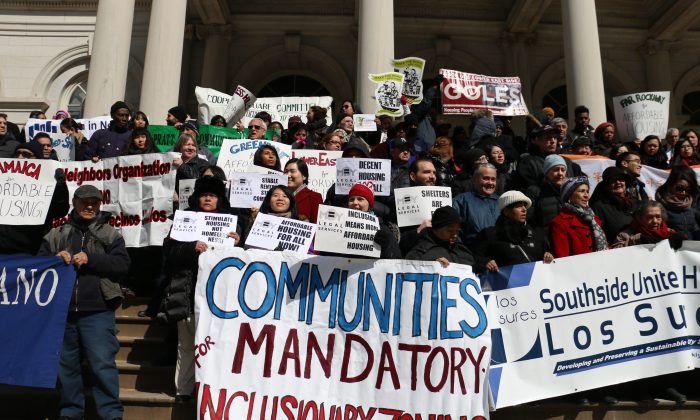 “This is a wide array of communities from across the city all calling for a guarantee of affordable housing in future residential developments,” said Barika Williams, policy director for the Association for Neighborhood and Housing Development, Inc. (ANHD).

ANHD wants non-expiration affordable housing, so that property owners cannot take affordable housing and turn it into market rate housing later. They ask that if there is any change to affordable housing units because of land use actions, that the units be replaced, and that rent regulated units also be exchanged 1-for-1 in new residences.

Different versions of MIZ laws only require that developers build a percentage of the affordable units, whether on or off the site they are developing. Affordable housing advocates called for all new residential units to include affordable housing, and that it be a mandate across the entire City.

Under former Mayor Michael Bloomberg, developers were given incentives to build affordable units but were not required to do so.

City Council member Brad Lander estimated in a 2013 report that from 2005-2013 the program generated on average about 346 affordable housing units a year (2,769 total), and only in certain areas. ANHD estimates that mandatory inclusionary zoning would create 4,000 new affordable units a year, with a total of 32,000 over the next eight years.

Cities like Chicago, Boston, San Francisco, and Denver have experimented with MIZ policies, and while they did and do create affordable housing, they have not produced such high results.

As public advocate, New York City Mayor Bill de Blasio included mandatory inclusionary zoning in his 2013 report, titled “Foundation for An Affordable City,” as one of many tools to make New York City more affordable. Since he took office he has not laid out his plans to create the promised 200,000 affordable units over the next ten years.

The New York Observer reported that when asked about the policy, the Mayor’s office sent a copy of the report, and said to expect more details in May.