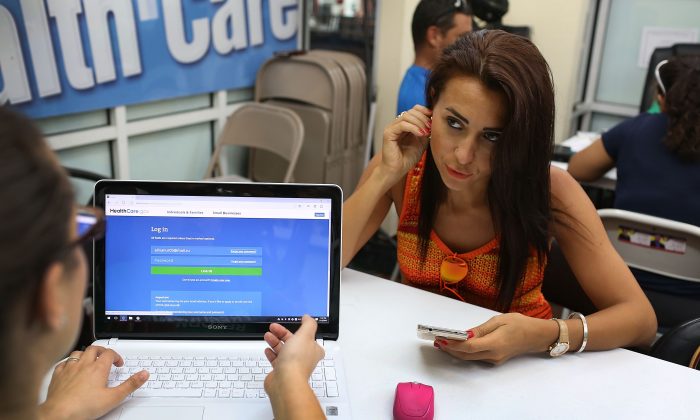 Alina Nurieva (R) sits with Gabriela Cisneros, an insurance agent from Sunshine Life and Health Advisors, as she picks an insurance plan available in the third year of the Affordable Care Act at a store setup in the Mall of the Americas on November 2, 2015 in Miami, Florida. (Joe Raedle/Getty Images)
US

Americans without health insurance will face harsher penalties in 2016, with the financial cost more than doubling over the previous year for some.

Those without health insurance were charged $325 or 2 percent of their household incomes–whichever was higher–in 2015. That penalty will jump to $695 per adult, or 2.5 percent of their income, in 2016, according to the government.

The percentage method only counts the part of household income that’s above the yearly tax filing threshold ($10,150 for individuals, $20,300 for couples filing jointly in 2014, the most recent year available). The percentage fee can also not be above the total yearly premium for the national average price of a Bronze plan sold through the marketplace. In 2015, that was $2,411, according to Value Penguin.

But larger families only have to pay for four people altogether.

The fee had already jumped from the initial year, 2014. That year the fee was $95 per adult or 1 percent of household income.

There are some exemptions for those looking to avoid the penalty. These include members of recognized certain religious sects that have religious objections to insurance, people in jail or prison, and people who are uninsured for less than three months of the year.

About 7.5 million Americans chose to forgo insurance and pay the fine last year.

“The reason is often simple. Consumers forced to choose between an expensive penalty and an even more expensive health insurance plan will often choose the cheaper option. It may be a financial necessity,” wrote Stephen Parente, professor of health finance at the Carlson School of Management, in the Las Vegas Review-Journal.

“The number of people making this choice will rise as insurance becomes ever more expensive.”

Parente estimates that by 2025, premiums for individual plans will be about 61% more expensive than they will be in 2016, while family plan premiums will be roughly 61.5 percent more.