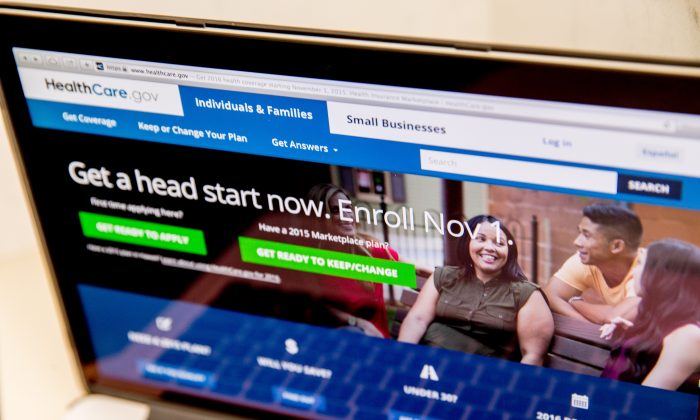 The HealthCare.gov website on a laptop screen in Washington on Oct. 6, 2015. (AP Photo/Andrew Harnik, File)
US

WASHINGTON—Seeking a strong showing in President Barack Obama’s last year in office, the administration said on Thursday, Jan. 7, that 11.3 million people have enrolled for health law coverage, with three weeks still left in the sign-up season.

But a major independent survey out simultaneously showed that progress reducing the number of uninsured Americans stalled last year. The Gallup–Healthways Well-Being Index found the uninsured rate among adults essentially unchanged in 2015, raising concerns about the lasting impact of Obama’s signature legislation.

“Enrollment is growing, though less quickly than anticipated,” said Larry Levitt, who follows the health overhaul for the nonpartisan Kaiser Family Foundation. “The law is hardly collapsing, as critics have suggested, but it continues to be unclear whether it will ultimately be the success that advocates had hoped.”

The administration is expecting a surge of young procrastinators to sign up near the Jan. 31 deadline for 2016 coverage.

Administration officials exuded confidence in a call with reporters.

“The marketplace continues to be stable, vibrant, and growing,” said Andy Slavitt, head of the Centers for Medicare and Medicaid Services, which administers the health overhaul’s online insurance market.

Officials said enrollees are trending younger, and a growing share of returning customers has grown savvy about comparing insurance options to find the best deals. The administration is expecting a surge of young procrastinators to sign up near the Jan. 31 deadline for 2016 coverage. That could help hold down premiums the following year.

Leading the administration’s tally was Florida, with more than 1.5 million signed up. California followed, with more than 1.4 million. About 8 in 10 customers are eligible for federal tax credits to bring down the cost of their monthly premiums. The administration appears on track to meet its target of having 10 million paying customers signed up at the end of this year.

In the 38 states served by the federal HealthCare.gov website, 29 percent of those signed up were new customers, a big priority. Overall, more than 1 in 4 was between the ages of 18 and 34, a coveted demographic since healthy young adults balance older customers who are more prone to medical problems.

Independent experts cautioned about drawing sweeping conclusions. In past years, there’s been a significant drop-off between the initial sign-up numbers and those who actually followed through by paying their premiums.

Caroline Pearson of the consulting firm Avalere Health said the numbers on young adults represent a “modest improvement” from last year. “Bottom line, I think these numbers reflect a relatively consistent age distribution with where we have been historically,” she said.

Another caveat: Administration officials said they are unable to tell how many new enrollees were previously uninsured. Since the health care law’s big coverage expansion got underway in 2014, the nation’s uninsured rate has come down to historically low levels. But a major independent survey also released Thursday indicated that accomplishment may be in jeopardy.

The Gallup–Healthways Well-Being Index found that the share of U.S. adults without health insurance was 11.9 percent in the last three months of 2015, essentially unchanged from the start of the year. The ongoing survey, based on daily interviews with 500 people, has been used by media, social scientists, and administration officials to track the law’s impact.

The sharp drop in the uninsured rate seen in the first of the law’s coverage expansion now has leveled off, Gallup said in an analysis.

“This validates concerns that similarly large reductions may not be possible in the future because the remaining uninsured are harder to reach or less inclined to become insured,” the analysis said.

The survey period included the first two months of the health law’s 2016 open enrollment season. That covered the first big sign-up deadline, which was Dec. 15 for those wanting coverage effective at the start of the year.

Gallup–Healthways said it expects results for the first three months of 2016 to show another decline in the uninsured rate. How big remains to be seen.

But 2015 was a lackluster year. The uninsured rate dipped to 11.4 percent in the period from April through June, then edged up again during the rest of the year. It was the first such reversal noted by the survey since the law’s big coverage expansion began.

The health law has added coverage in two major ways. Online insurance markets like HealthCare.gov offer taxpayer-subsidized private plans to people who don’t have coverage on the job. And states can opt for a Medicaid expansion aimed at low-income adults with no children living at home.

The law also requires virtually all Americans to have coverage or risk fines. With penalties going up this year, that may drive the last-minute enrollment push.

Earlier this week, the Republican-led Congress sent legislation repealing the Affordable Care Act to Obama’s desk. The president is certain to veto it, but opponents say they’ll keep “Obamacare” alive as a political issue in the presidential election.