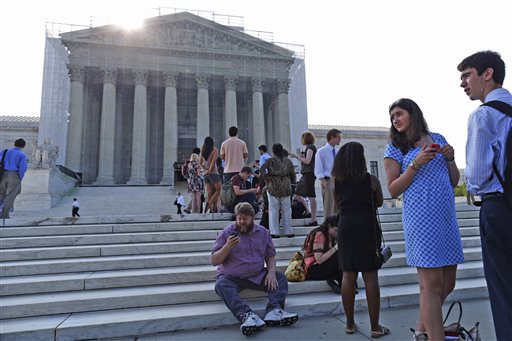 The Supreme Court in a seven to one opinion sent the much anticipated affirmative action case back to a lower court, ruling that how the process of including race in college admissions works in real life had not yet been examined closely enough.  It could have ended affirmative action, or again found it to be constitutional.

Justice Anthony Kennedy wrote, “Strict scrutiny does not permit a court to accept a school’s assertion that its admissions process uses race in a permissible way without closely examining how the process works in practice.” The justices want the lower court to examine if the goal of diversity can be achieved in another way than by considering race as a factor in admitting students. “The reviewing court must ultimately be satisfied that no workable race-neutral alternatives would produce the educational benefits of diversity,” according to the opinion.

People were waiting to see if the justices would strike down affirmative action, according to Law Professor Derek Black of the University of South Carolina. They wondered “Does Kennedy hate the status quo more or hate affirmative action more?” he asked.

“Really, all the court does is say if you are going to use race you have to be sure there are no other options.  It’s really kind of fascinating,” he said.

The Fifth Circuit Court of Appeals in New Orleans will have to go back to the drawing board, and the Supreme Court will have to reconsider the issue next year, in another case. Next year’s case is about a ballot initiative in Michigan barring affirmative action based on sex or race, called Schuette v. Coalition to Defend Affirmative Action. The question is whether a state vote to ban affirmative action violates the Constitution’s promise of equal protection.

That case is interesting because it does not really address the race issue, according to Black.  This is something ideologically neutral, he said. “You can’t use the ballot box to disadvantage a certain political position,” he said.  It would not be constitutional for voters to prevent the state from practicing affirmative action, or from doing anything that is legal, just because a majority of voters did not approve.

Of the nine justices, only Clarence Thomas would have overturned affirmative action, according to the opinion. He wrote that he would have overturned the 2003 case that UT used to shape its policy on using race in admissions. The 2003 case ended racial quotas but still allowed race to be one of multiple considerations for college admission.  Thomas considers affirmative action to be paternalistic and demeaning to African Americans, according to Black.

Project 21, an organization of black conservatives, issued a statement about the ruling.

“I applaud the justices for realizing that terms such as ‘diversity’ are merely code words for quotas and set-asides that neither foster racial harmony nor truly help those who are allowed to skip the line. We owe people the best education possible, and preferences betray that ideal,” wrote Project 21 Co-Chairman Cherylyn Harley LeBon, a former senior counsel for the U.S. Senate Judiciary Committee.

It is constitutional for a school to consider race as part of admission criteria. In Grutter v. Bollinger (2003), the court decided that creating a diverse student body is in the interest of the state. UT adopted its policy of considering race after that ruling.  The 2003 case said quotas are not allowed, but including race with leadership qualities, extracurricular activities and other strengths is legal.

Only Justice Ruth Bader Ginsburg disagreed. She would have allowed the UT admissions policy to remain the same. Ginsburg wrote, “Among constitutionally permissible options, I remain convinced, “those that candidly disclose their consideration of race [are] preferable to those that conceal it.” She wrote that the appeals court had already settled the issue and the Supreme Court should have affirmed its decision.

Justice Elena Kagan recused herself, probably because she dealt with the case while she was at the Department of Justice.