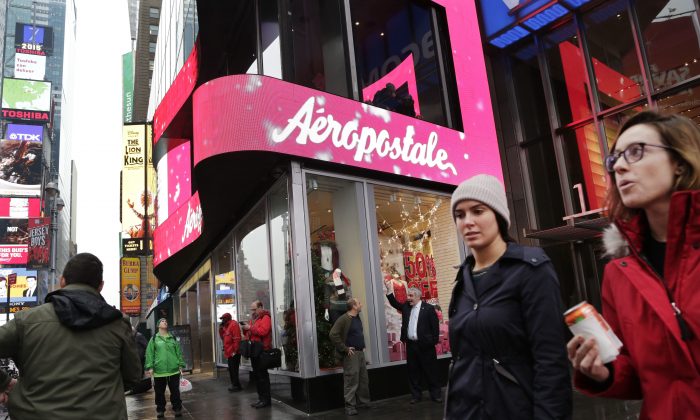 Clothing retailer Aeropostale is closing 113 stores across the United States and 41 more in Canada, the company announced. It is also filling for Chapter 11 bankruptcy protection.

The closing sales will begin on the weekend of May 7-8 in the United States and during the week of May 9 in Canada. The Aeropostale website already lists almost 400 items in clearance with discounts of up to 70 percent.

Aeropostale’s revenue has dropped almost 40 percent since 2013. It was able to cut operating expenses by over 30 percent in the same period, but that hasn’t prevented a net loss three years in a row.

In 2010, Aeropostale was valued around $2 billion on the stock market, but since 2013 its price plummeted and as of May 4 this year its website lists a valuation of less than $2.4 million.

“[T]he ripple effects of an ongoing dispute with our second-largest supplier put substantial strain on our liquidity while also preventing us from realizing the full benefits of our turnaround plans. As a result, we have chosen to take more decisive and aggressive action to create a leaner, more efficient business that is well-positioned to compete and succeed in today’s retail environment,” said Julian Geiger, Chief Executive Officer, in a press release.

Aeropostale will still have over 600 locations in the United States. In Canada though, only 20 locations will remain open. One of the most prominent stores to be nixed is the 1515 Broadway location in Times Square, New York City.

How Important Is It to Wash New Clothes Before Wearing Them?

Map of Locations Closing in the United States

Locations Closing in the United States

Map of Locations Closing in Canada

Tailoring Can Bring out the Best in Clothes