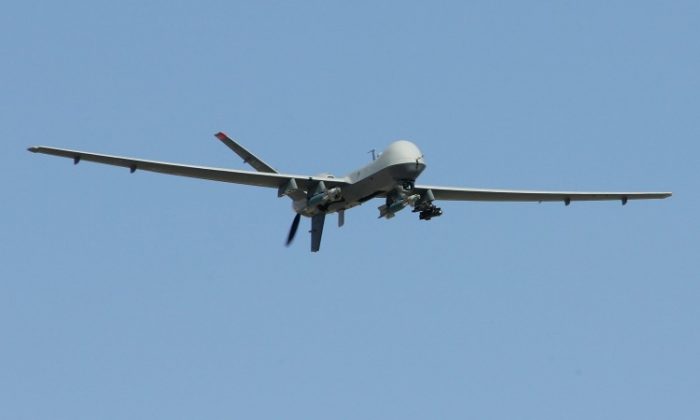 An aerial drone flies by on a training mission at Creech Air Force Base in Indian Springs, Nev., in this file photo. Drones are now being used for nature conservation all over the world. (Ethan Miller/Getty Images)
US

Unmanned aerial drones used to hunt down and destroy terrorists are serving a much different role lately. Known as ‘conservation drones,’ the aircraft are aiding in nature conservation all over the world, including the United States.

Instead of hunting terrorists these planes often track poachers overseas. The planes are also used to map and measure forest loss and track endangered species. On the home front, these planes are often used to study plants and animals in a noninvasive manner.

The University of Florida (UF) in Gainesville has been utilizing unmanned aircraft for the past few years. Using drones means that researchers no longer have to personally venture out to the field in small aircraft.

“In the wildlife biology business, light aircraft are used in and have been used for a very long time,” said University of Florida professor and U.S.Geological (USGS) Survey biologist Dr. Franklin Percival, according to winknews.com.

Not only can flights for researchers be expensive and time consuming, but repeated trips in small aircraft means a higher flight-mortality risk for scientists.

A multidisciplined team of students and professors is responsible for the design of the UF’s Unmanned Aerial Vehicle (UAV) project. A specific UF conservation drone operation includes monitoring the Brown Pelican near Cedar Key.

Certified pilot and USGS Fort Collins Science Center, Colorado biologist Leanne Hanson has been using drones since 2009. Currently, Hanson is testing the drones they call small, unmanned aircraft systems (sUAS), to see if they are able to accurately study more shy creatures in the wild without disturbing their normal patterns. The skittish migrating Sandhill crane is one of the birds they study.

Overseas development of conservation drones has been ongoing for more than a decade. Lian Pin Koh, of the Swiss Federal Institute of Technology, shared his inspiration for his UAV project after a grueling excursion through the jungles of Sabah, Malaysia.

“I told my assistant, who happened to be my wife, ‘How wonderful it would be if we could fly over that area rather than walk there again tomorrow,'” he said according to the Huffington Post.

Koh is not only an expert on tropical deforestation, but also a model plane hobbyist and designer/pioneer of the conservation drone project.

The aircraft can either be independently automated using preprogrammed instructions from onboard computers, or controlled remotely by a ground navigator.

The drones come in a variety of sizes depending on the need, and their weights range from about a pound to more than 18 metric tons.

The drones are also much cheaper than ground operations, which include lengthy planning, time-consuming treks, and helicopter and aircraft fees, which can add up to on average of $250,000.

Satellites have also been used recently in the field of conservation, and can be expensive. They are also highly weather restricted, as cloud cover can impair tracking.

Kol and other drone developers have greatly lowered the cost with the use of drones. Kol has developed smaller, noncommercial drones with an average cost of about $2,000, far less than the conventional methods. Kol is currently in the testing phase of his 2-meter wingspan plane, which has an airtime of 45 minutes and range of about 15 miles.

A drawback of drone usage include landing zones for which they need approximately 100 by 100 yards to set down safely. Kol is currently working on a parachute system for his planes for when safe landing zones are not available.

In addition to their military role of tracking and targeting terrorists in Afghanistan and throughout the Middle East, the versatile aircraft have been used in a civilian capacity for firefighting, road patrols, and hurricane tracking.