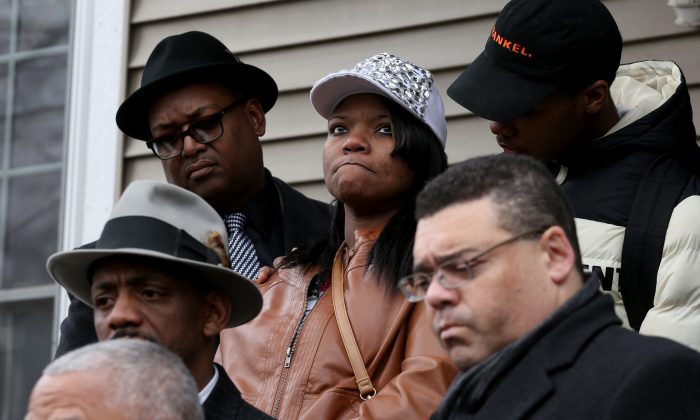 LaTarsha Jones, center, the daughter of Bettie Jones who was shot and killed by Chicago Police, is surrounded by friends and family in front of Jones' home in Chicago on Sunday, Dec. 27, 2015. Attorneys Larry Rogers, Sr., bottom left, and Sam Adam, Jr., bottom right, stand with family members. Grieving relatives and friends of Bettie Jones and a man shot and killed by Chicago police said Sunday that the city's law enforcement officers had failed its residents. (Nancy Stone/Chicago Tribune via AP)
US

CHICAGO—In the wake of another police shooting, Mayor Rahm Emanuel called for an immediate review of how the Chicago Police Department trains officers to respond to calls involving people in crisis or with mental health problems.

But advocates for what’s known as crisis intervention team training say Chicago’s program has been “starved” of resources, with only about 15 percent of officers completing the 40-hour course. Advocates say they tried to get meetings with Emanuel early in his first term to stress the importance of the training and ask the city to invest more in it, but were ignored. Illinois’ budget crisis also created a lapse, not just in Chicago but elsewhere.

The issue resurfaced last weekend, after officers responding to a domestic disturbance shot and killed a 19-year-old man and a 55-year-old woman. The deaths of Bettie Jones—who police say was accidentally hit by gunfire—and Quintonio LeGrier occurred just weeks after the Department of Justice opened a civil-rights investigation into Chicago police practices.

Here’s a look at Chicago’s training program and what its supporters describe as the city’s “shameful” response to a growing crisis.

LeGrier’s father said the Northern Illinois University student appeared to be a “little agitated” and later tried to bust open his door, prompting Antonio LeGrier to call police. He said Jones, who lived downstairs, told him Quintonio LeGrier had a baseball bat.

Relatives of both shooting victims have questioned why police opened fire and if the situation could have been handled another way. On Monday, Antonio LeGrier filed a lawsuit against the city, saying his son was never a threat and that officers used excessive force.

Family members of another man, Philip Coleman, had similar questions after officers arrested the 38-year-old in 2012. He later died in police custody.

Coleman’s family said they told officers that he was mentally ill and experiencing some type of breakdown. A video released this month shows officers later entering Coleman’s jail cell, using a stun gun on him and then dragging him away.

He later died after being given an anti-psychotic drug. Emanuel has said an investigation into how police handled the case is being reopened.

In CIT training, officers learn to identify a person who is in crisis and to de-escalate situations in which someone is agitated or exhibiting other signs of mental trouble.

That may mean taking more time for the person to calm down, talking with the person about what’s happening or finding other resources such as a case manager or mental health clinic rather than making an arrest.

There are more than 2,700 CIT programs across the U.S.

Amy Watson, an associate professor of social work at the University of Illinois at Chicago, has been involved with the Chicago Police Department’s program since it formed in 2005 and has conducted two studies on its effectiveness. Her research and other studies have found that officers trained in CIT methods use less force, are better equipped to defuse crises and reduce the risk of injury.

Any deficiencies, Watson and James agree, are in how it’s been implemented in the Chicago Police Department.

About 1,860 officers, or approximately 15 percent of the police force, have received the training, Chicago police spokesman Anthony Guglielmi said Monday.

Watson and James say the percentage should be closer to 25 or 35 percent—enough so that there’s a CIT-trained officer on every shift in every police district who can respond to calls as needed.

Right now, that kind of coverage is “spotty,” Watson said. It’s particularly difficult to find a trained officer on the overnight shift.

“Every officer is trained in how to use a firearm, but not every officer will use their weapon,” James said. She said the likelihood of an officer encountering a person in crisis is far greater.

Training also has been inconsistent at the city’s 911 center, where dispatchers should ask questions to determine if a situation involves someone with a mental health issue, then dispatch a CIT-trained officer if one is needed. That training hasn’t been happening often enough, they said.

Watson said she and other academics, as well as advocacy groups, attempted to speak with Emanuel after he was elected about committing more resources to CIT.

“We couldn’t even get a call back,” she said.

Around that same time, the city closed several mental health centers because of budget problems. And this year, with state lawmakers and Gov. Bruce Rauner unable to agree on a budget, there was no money to conduct the training in the first half of the fiscal year. That means about 200 Chicago officers missed out on the class, James said.

The department plans to hold 26 CIT training sessions in 2016, providing the course to an additional 910 officers, Guglielmi said.

Emanuel on Sunday issued a statement saying his interim police superintendent and a police oversight agency will determine any deficiencies in the training and act to correct them.

“The changes we have made in recent weeks are just a beginning — not an end,” he said. “We will continue to ask tough questions of the police department, of the investigative agencies and of ourselves, to drive the reforms the people of Chicago deserve and expect.”

Emanuel’s office said he was returning early from a family vacation to Cuba to address the latest crisis, and would be back in Chicago on Tuesday.