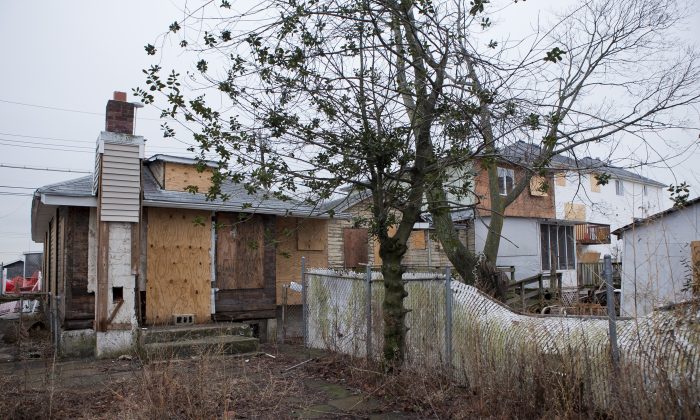 NEW YORK—Superstorm Sandy recovery advocates are beginning to lose patience with Mayor Bill de Blasio. Though the still new mayor has promised repeatedly to put forward a Sandy recovery plan, he has done nothing concrete in three months into his administration.

At the end of February, de Blasio did promise that a plan would be presented “in coming weeks.” He has made similar statements repeatedly at numerous public appearances since. Around the same time, the first round of housing recovery reimbursement checks should have been delivered under the Build It Back program. No explanation has been offered as to the delays.

Out of thousands of applications, only six reimbursements for out-of-pocket repairs under Build It Back have gone out. A representative for the mayor’s office said on Thursday more checks were “in the process of going out to be mailed” this week, and that a plan would be announced in the coming days, or weeks.

The delays are compounded by the expectations that de Blasio set up during his mayoral campaign that he would use Sandy recovery to address long-standing issues of inequality in New York City.

As a candidate, de Blasio visited the hard-hit Far Rockaways, where he said “With these new resources from the federal government, we have to use it as a moment to not just right the wrongs of Sandy, but to right some greater wrongs.”

His group worries that although March 24 marked the deadline for the city to submit it’s general action plan for $3.2 billion in federal disaster recovery funds, de Blasio has not made specific plans public.

Advocacy groups like Faith in New York are especially concerned for those who were already socioeconomically vulnerable, and have been in a perpetual state of limbo since the storm in late 2012.

“Sandy didn’t really create new problems, it brought to the surface many problems that were there already,” McKellar said.

He said from his organization’s perspective, recovery goes far beyond improving infrastructure and rebuilding homes.

If the public comments the mayor has made about Sandy recovery are any indication, his plans will align with his overall progressive agenda. That promise of a departure is a plus for some and a problem for others.

“There’s a first order way to right greater wrongs, but instead he wants to use specifically appropriated Sandy money,” said one GOP insider source who asked not to be identified. “It really does seem that he looks through these glasses that are colored with ideology—it’s in a way that’s ultra-progressive.”

Progressive or not, there likely isn’t enough money to address the projected need. The city estimated in its 2015 preliminary budget that it needs $4.6 billion for Sandy recovery. That represents a more than $1 billion shortfall from allocated funds.

Other forms of pressure are increasing, too.

The letter requests a “thorough, independent review” of how New York City has handled HUD funding since few New Yorkers have seen benefits. It states, however, that the city has already paid itself back $360 million for costs incurred.

Alliance for a Just Rebuilding (AJR) is another organization that is keeping a watchful eye on how de Blasio’s campaign promises play out for Sandy survivors.

Susannah Dyen, a policy coordinator for the AJR in New York City said, “He made a number of promises about using this moment to address long-standing inequities.”

One way that can be done is by reopening registration for Build It Back, the city’s main housing recovery program. Many elected officials, nonprofits, and program officials themselves have said publicly that the initial registration didn’t reach enough low-income storm victims.

“We feel the initial outreach was flawed,” said Dyen. Though reopening registration could push higher income applicants back in line for assistance, federal rules do intend the assistance first for the more financially vulnerable.

Dyen agrees. “This money should help those who have less income.”