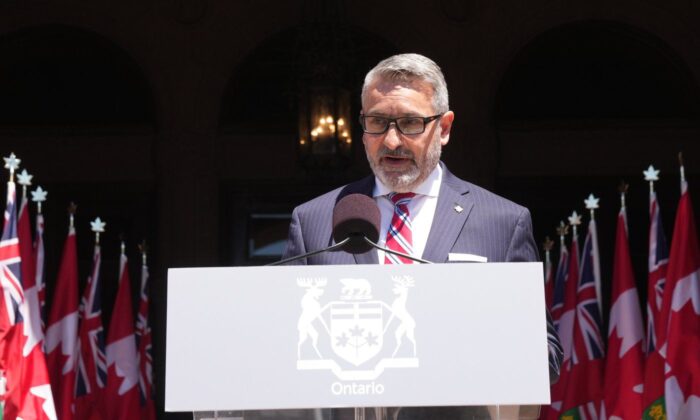 Long-term care and seniors’ advocates say they are disappointed Ontario’s Progressive Conservative government is planning to bypass public hearings for long-term care legislation that allows hospital patients awaiting long-term care to be transferred to a home without their consent.

The seniors’ advocacy group CARP, a lawyer for the Advocacy Centre for the Elderly and a long-term care advocate all say they had been hoping to participate in public hearings because they have serious concerns with the bill.

The legislation would allow hospital patients to be transferred to a temporary long-term care home without their consent while they await a bed in their preferred facility.

The government has now moved a motion that would advance the bill directly to third reading, which means it will not be considered by committee or be subject to public hearing at that stage.

The legislation doesn’t allow patients to be physically forced to move to a long-term care home, but it’s not clear what would happen if a patient refuses a transfer.

Calandra said this week that people should “absolutely” be charged a fee in that situation, but his office refused to clarify when patients should be charged a $62-a-day co-pay and when they should be subject to a hospital’s uninsured rates, which can be thousands of dollars a day.

Hospitals can already charge the co-pay to so-called alternate level of care patients who are waiting for a long-term care bed, which advocates say is roughly what they would be paying in long-term care.

But nothing in the legislation prevents hospitals from charging their uninsured rates to patients who don’t want to move to a home outside of their community, said Jane Meadus, a lawyer with the Advocacy Centre for the Elderly.

“The minister talks about, ‘We’re not going to physically restrain people’ and all of that…However, if someone comes in and says, ‘If you don’t take that we’re going to charge you $1,300 a day,’ are they going to consent to the admission?” she said.

“Most people probably will, because of that.”

Meadus and many other advocates said they would have wanted to present at committee hearings.

“This is a piece of legislation which is taking away very serious rights of people to determine where they’re going to live,” she said.

“They’re just running roughshod over the rights of seniors and people with disabilities who have to live in long-term care.”

Vivian Stamatopoulos, a long-term care researcher and advocate at Ontario Tech University, said the legislation is “disgusting” and the government should mandate that patients who refuse these transfers cannot be charged uninsured rates.

“Why would you try to bankrupt seniors?” she said.

“All of this from head to toe is morally repugnant. I think it’s fundamentally undemocratic and I think that they should be ashamed of themselves for trying to push through something so serious in this fashion.”

Bill VanGorder, the chief operating officer and chief policy officer of CARP, said his members have real concerns about the bill, saying it looks at what is best for the system, not the individual patient.

He said he would like to see more details on the process and how involved patients and families are, as well as assurances that couples would not be split up by moves made under the legislation. He also said there should be limits placed on how far away a patient can be sent—the government has said those maximum distances will be set in regulation, after the bill passes.

“The impact is distance from family and friends…because of the understaffing there, the families have found they have had to contribute a lot of family care and attention, and also just in terms of assisting these people talking to doctors and nurses and helping the patient understand what’s being done,” he said.

Patricia Spindel, co-founder of Seniors for Social Action Ontario, said she would have liked to present at committee, but has no amendments to propose, saying the whole bill should just be scrapped.

“I’m honestly not sure how they can live with themselves,” she said. “These are the most vulnerable people in Ontario.”

The NDP, Liberal and Green parties say it’s wrong of the government to skip having public hearings on the legislation. Interim Liberal Leader John Fraser called it an unusual step.

“That’s what we normally do. We need to hear from them. We’re going to eliminate that. Government doesn’t want to talk about that. This bill should be withdrawn. I think if we have those committee meetings, that will be evident. I don’t think this bill is amendable in any way.”