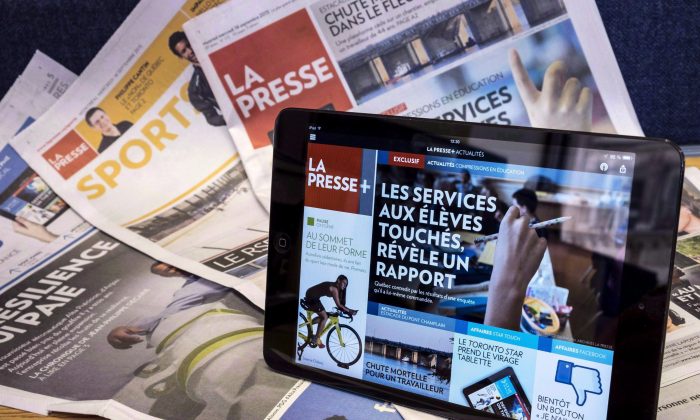 A tablet is seen on the newspaper edition of a La Presse newspaper. Advertisers are packing up their campaigns and moving out of print media at a pace that shows no sign of slowing over the next four years, according to a new report. (The Canadian Press/Paul Chiasson)
Business & Economy

Advertisers Expected to Speed Up March to Digital Media in Canada

TORONTO—More trouble is on the horizon for Canadian newspapers and magazines.

Advertisers are packing up their campaigns and moving out of print media at a pace that shows no sign of slowing over the next four years, according to a new report.

International research firm EMarketer, a source of data for the advertising industry, expects domestic print ad sales will “drop steadily” by 4.5 percentage points between now and 2019 as marketers spend more of their budgets on digital platforms like video, mobile phones, and social media.

“Digital’s high degree of targeting precision and advanced metrics are attracting a larger share of ad budgets,” EMarketer said in its findings, released this week.

It’s part of a shift that has been happening for years now, but quietly intensifying under the radar.

Pair that with a meteoric rise of social platforms like Facebook, Twitter, and Instagram, which gather valuable information about the demographics and interests of their users and then curate a lineup of targeted ads that fit their tastes.

Advertisers have become more savvy about how they spend their money and launch online campaigns while simultaneously lowering the priority of print.

It’s a worrying prospect for Canadian media outlets, but a fact that the World Association of Newspapers and News Publishers, a non-profit consortium of print companies, officially recognized when it proclaimed that a “profound shift” in the global newspaper business had officially arrived.

“The basic assumption of the news business model—the subsidy that advertisers have long provided to news content—is gone,” said Larry Kilman, secretary general of the organization in a statement earlier this year.

“We can freely say that audiences have become publishers’ biggest source of revenue.”

Experts in the Canadian advertising industry generally agree they’re increasingly looking at other places to spend their budgets.

“The older models are taking a back seat,” said Dan Snow, founder of Snow Digital, a Toronto-based brand strategy developer for small and medium-sized businesses. “There’s a shift in their size of the pie.”

Newspaper advertising will represent 20 percent, or about $2.65 billion, of the country’s overall marketing spend in 2016, and EMarketer suggests that figure will slide to 16.5 percent by 2019.

Growth in digital advertising, however, will spike over the same period, rising 10 percent next year to $4.80 billion. Within four years, it will represent 41.7 percent of overall spending.

Within that figure is social media—the Facebooks and the Instagrams—which is expected to grow by 25.7 percent next year to $767.7 million, on its way to being a $1 billion market a year later.

“We’re seeing social media brought into the fold more and more as companies mature and get more analytical,” said Andrew Reid, founder of Vision Critical, which specializes in intelligence software platforms for businesses.

“The challenge of traditional [media] is it takes so long to get messages out in a market that’s so fast-moving.”

Reid believes there are still lessons to be learned by marketers in social media, but that many have become more strategic and thoughtful about their approach as they capitalize on all of the new insight available about their customers.

“Traditional advertising is very much a ‘spray and pray’ model,” he said. “You get the hose out and hope you’re going to hit enough people.”

Some of the country’s biggest print outlets have come up with their own answers to keeping advertisers appeased.

In September, the Toronto Star launched Star Touch, a tablet app designed help it stay nimble with advertiser demands and appeal to younger demographics. Within 50 days, the newspaper said it had surpassed 100,000 downloads of the app on Apple’s iPad before launching on Android tablets earlier this month.

But the company is still facing pressures that overshadow its new endeavours.

Last month Torstar, the Star’s parent company and owner of various other newspapers in Ontario, halved its dividend payments and warned investors of continued pressure on print advertising revenues.

Postmedia, which recently shut down its evening tablet edition, took a similarly bleak outlook on the new year. President and CEO Paul Godfrey told investors that cutting costs remains a high priority for the company.

“We cannot take our foot off the gas with respect to cost savings,” he said on a conference call in October.

Over the next year, experimentation could be at new heights in Canadian media as companies search for the magic solution to their financial woes.

Keith Eadie, chief marketing officer at digital advertising firm TubeMogul, expects news websites will be Ground Zero for some of these tests.

Banner advertisements could be one of the first to fade as more companies sour on “static display methods” to sell their products, he said.

Instead, ad buyers will likely push for more embedded video ads, the kind that emerge from between the paragraphs in print stories—a practice that’s already commonplace on many of Canada’s news sites.