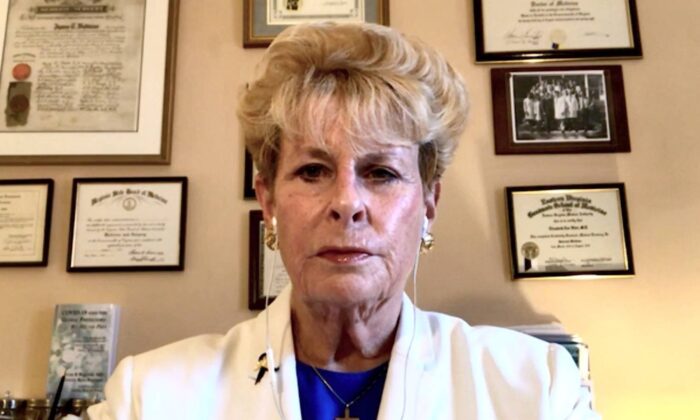 Complications and adverse reactions occurring after administering mRNA COVID-19 vaccines have been anticipated by doctors based on data and studies going back 15 years, said Dr. Elizabeth Lee Vliet.

When the COVID-19 vaccines were rolled out, it was already known that the toxicity of the spike protein and the toxicity of another component of the vaccine could cause complications such as inflammation, blood clots, and disruption of the immune system, Vliet said in a recent interview for EpochTV’s “Crossroads” program.

“Over the first six months after the rollout of COVID-19 shots, I had a whole gamut of patients with all kinds of problems they had not had before,” she said, adding that the only common denominator of these cases was that they all had the COVID-19 vaccines.

“Most of these people are people that have been my patients for 20 or 25 years. I even have some that I’ve seen for 30 years. And I knew their medical history,” she said.

The doctor mentioned two of her patients, a couple in their 70s who were healthy and fit and exercised regularly, walking 7 miles a day. They got the COVID-19 shot so they could travel to see their children and grandchildren.

Since then, the woman’s heart arrhythmia has been out of control and the man began having falling episodes that resulted in a broken hip, Vliet said.

“And if the patient has new health problems, right after you’ve given them a treatment or a medicine or a shot, then consider that as the connecting link,” she said.

“Those principles are common sense. It’s basic medicine 101 … and it’s been true my whole career.”

Doctors generally stop administering a medicine when a patient shows side effects that they didn’t have before, to see if those reactions resolve, Vliet said. “The same is true with any vaccine.”

“I’ve seen patients over my career who’ve had adverse reactions to all the different vaccines,” Vliet said, adding that she herself has had vaccines in the past and has not experienced any adverse reactions.

“I’ve recommended them appropriately for patients over my career. But there are also times when vaccines simply aren’t needed. COVID was one of those.”

“I didn’t have any of my patients go in the hospital. I didn’t have anyone die,” she said. She did have some older patients with diabetes, obesity, and other medical conditions who were pretty sick with COVID-19, but she kept them out of the hospital with an aggressive combination of drug therapies recommended by McCullough.

“So vaccines are not always the answer to every problem,” she said, adding that for COVID-19, the best answer was early treatment.

But the government and the political agenda suppressed and persecuted doctors who were treating patients early with older and safer medicines, Vliet said.

Zelenko, a practicing physician in Monroe, New York, had treated 3,000 patients with COVID-19 symptoms with the anti-malaria drug hydroxychloroquine, azithromycin, and zinc sulfate, and only three of his patients with high-risk conditions died, Dr. Joseph Mercola wrote for The Epoch Times.

How to Treat Vaccine Injuries

To help people suffering from vaccine injuries, the Truth for Health Foundation prepared an educational booklet explaining vaccine adverse reactions and treatment options, said Vliet, who also works pro bono as the president and CEO of the foundation.

The treatments include a combination of prescription medications, nutraceuticals, supplements, foods, neuroprotection, immune boosters, and also lifestyle changes, Vliet said, adding that she uses this combination approach to treat her patients, with positive results.

“One of the foundational medicines that has had enormous benefits for the patients I’m treating, for example, is hydroxychloroquine,” Vliet said, “because it’s anti-inflammatory, it’s an immune modulator, it’s anti-viral.”

“We’ve never in the history of the vaccination program worldwide, had an experimental shot that crosses the blood-brain barrier, gets into the brain itself, and the nervous system,” Vliet said.

“These COVID gene therapy shots do that,” she said. “They also cross the placental barrier … so it’s understandable why these experimental gene therapy shots are causing so much damage to developing babies in the womb, to the brain, and central nervous system in children and adults.”

Since doctors understand the mechanism of how the vaccines work, they can use existing medicines to treat adverse effects, Vliet explained.

The Truth for Health Foundation is filing two lawsuits in federal court over the unlawful orders and mandates for experimental products, Vliet said.

“All of the testing, masking, and vaccine products are emergency use authorization only. None of them are FDA approved for COVID. That means it is illegal to mandate any of these EUA products.”

Recently, health care workers reached a $10 million settlement against their employer over the COVID-19 shot mandate, Vliet said. Private employers do not have the same liability protection that the government and the vaccine manufacturers do, she explained.

“That case has opened the door for thousands more lawsuits against the private employers that have implemented these mandates and cost people their jobs,” she said.

About a dozen workers at NorthShore University Health System in Illinois filed the suit in October 2021, arguing that the facility was illegally refusing religious exemptions to the mandate. In July, the litigants agreed to settle this case.

Under the settlement’s terms, NorthShore will pay $10.3 million into a settlement fund for workers affected by its mandate—specifically, workers who asked for religious accommodation and were denied and either received a vaccine to avoid termination or were fired or resigned from their employment. About 473 workers fit under that category.

The company has also agreed to rehire any employees who were fired for not getting vaccinated due to their religious beliefs.

There is a government system to collect data about adverse reactions to all vaccines called the Vaccine Adverse Event Reporting System (VAERS), but inputting data into the system is complicated and time consuming.

Moreover, only about 10 percent of all vaccine adverse events are reported in VAERS, as estimated in 2012 by Harvard researchers, despite the fact that entering data about adverse incidents can be done by anyone and health professionals are required to report certain types of side effects, Vliet said.

Therefore the Truth for Health Foundation has created its proprietary Citizens Vaccine Injury Reporting System, where people can “easily and quickly” report their injury even from a mobile device, Vliet said.

Once the data is accumulated, the foundation’s medical advisory panel of scientists, physicians, and epidemiologists will help to analyze the data, and reports produced based on the collected data will be made public, Vliet said.