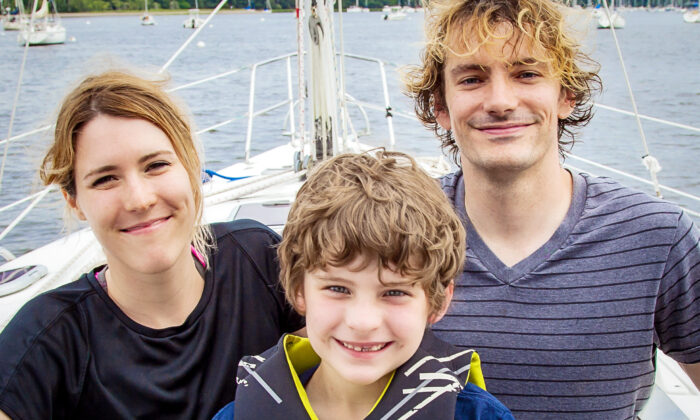 The Wynn family aboard their 38-foot sailboat, The Sunwise. (Kristi Wynn)
US Features

Adventurous Family Spends the Pandemic Traveling on the Seas

Alex and Kristi Wynn began their life’s adventure together at the tender age of 14, when they both were students at Charlotte High School in Punta Gorda, Florida.

After temporarily separating to go to different colleges, with Kristi earning a master’s degree in data analytics from Boston University and Alex a Master of Arts in physics from Vanderbilt University, they came back together. Now, after 12 years of marriage, the pandemic spurred them to live on the ocean aboard their 38-foot sailboat, The Sunwise.

Eight years ago, Kristi gave birth to Thomas, who shares in their day-to-day sailing adventures. Also on board is their cat Fyodor and a hamster named Rookie. Surprisingly, the cat and the hamster have found a way to “coexist,” Kristi said.

Before the pandemic, Kristi worked at a pharmaceutical company in the quality department and Alex worked at the Massachusetts Institute of Technology with computers, and is currently on extended leave. He works as a consultant while aboard The Sunwise.

The couple were hesitant to tell their parents of their sailing plans.

“Our moms have always been our cheerleaders with our goals and ambitions,” Kristi said. “When we told our moms about our plan to uplift the family, quit our jobs, and sail thousands of miles to pursue our dream … there were instant gray hairs.”

Kristi said there would be midnight texts from their parents with questions they “hadn’t even considered.”

“They asked questions about pirate attacks or being lost at sea,” she said. “We were able to calm their fears by sharing success stories from our friend Nafiun Awal, who gave data for the likelihood of attacks or disasters, and communicate daily of our progress.”

When Kristi, Alex, and Thomas “came home” to Punta Gorda in early December, Kristi got a most pleasant surprise from her folks.

“My parents told me they were proud of us for our courage and ability to make the dream a reality,” Kristi said as tears welled in her eyes. “Words from your parents like that will make you cry.

“When the pandemic hit, we decided to buy a sailboat. It’s something we’ve always wanted to do; with a laptop and a hotspot, we can do just about anything, even homeschooling.

“The pandemic was the accelerant. Without it, we might have gone sailing eventually, but maybe not until retirement or [when our] son’s off to college.”

Kristi said Thomas has seen things that other children have only seen on television or read about in books.

“The best education sometimes is the one that isn’t taught out of books,” Kristi said. “Thomas has seen ocean life that very few adults get to see, much less children.”

Thomas said his favorite thing that happened during their trips was when “about 20 dolphins surrounded our boat and stayed with us for over an hour.”

“They would jump straight out of the water next to the boat and squeak as if they were talking to us,” the excited 8-year-old said. “I loved looking over the edge into the other world, as they looked back at ours.”

However, the trip hasn’t always been a pleasant one, as the trio experienced rough weather near Annapolis, Maryland, this past October during what the National Weather Service described as a “flood that was the fourth-worst in Annapolis’s recorded history.”

“We were in Annapolis for Halloween and heard it was safe to weather storms on mooring lines,” Kristi said. “The gusts got up to 50 miles per hour, and the waves were every second pushing us around.”

Kristi and Alex said they weren’t fast enough to get up to the deck before “drifting into another boat.”

“Our boat broke off the mooring ball, as did the other boat next to us,” Alex said. “The other boat was unmanned, and unfortunately smashed into the wall and bucked around until the Coast Guard came.”

Kristi said the following day, kayakers could be seen filling Annapolis streets to see “the damages the storm had brought.”

The family is musical, so for entertainment, Alex plays the guitar and Kristi the keyboard.

“We absolutely love to live creatively and make music together, she said. “We find it therapeutic and a way to connect with others.”

“Alex’s band is called Lifelvl and mine is Slapped Lucky,” she said.

The couple also found a way to socialize while they were isolated aboard the vessel 24/7.

“There are other people doing what we’re doing,” she said. “We find them on social media, and we connect and find other people who have similarities to ours and children the age of Thomas.”

Alex said that a “good attitude” and a “laid back” attitude are necessary to be able to live in “close quarters” with your family.

“We get along well,” he said. “I can’t think of a time that we have been cross toward each other this whole trip.”

With states and companies opening back up after the pandemic, it seems the Wynns will soon return to their normal lives, as Kristi says she is “getting bored and needs the challenges of work.”

“Sailing is a good temporary cure [for boredom]—it sounds relaxing and easy, but it’s a complicated new set of skills to learn,” she said.

“The world is not set up for boats with the same conveniences that people expect from typical life, such as drive-through food, delivery services, and utilities like power and water, which makes for a series of additional challenges.”

As for the near future, Kristi said traveling remains at the top of their list.

“For the longer term, we love to travel and explore new places and learn new skills,” she said. “Hopefully the world will return to a state where it isn’t necessary to live on a sailboat to accomplish this.”

In their future travels, Kristi and Alex said their goal is to sail to the Southern Hemisphere to see the Southern Cross, a constellation of stars that has inspired songwriters and poets alike. Sailors knew it well and used it to help navigate their boats. The national flags of Australia and New Zealand include versions of the Southern Cross on them.