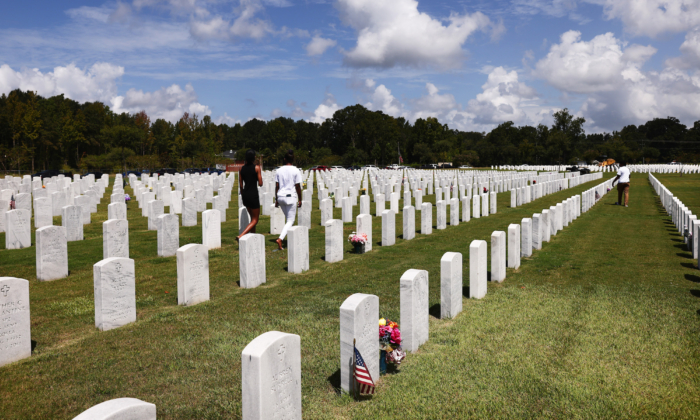 Death claims for working-age adults under group life insurance policies spiked well beyond expected levels last summer and fall, according to data from 20 of the top 21 life insurance companies in the United States.

Death claims for adults aged 35 to 44 were 100 percent higher than expected in July, August, and September 2021, according to a report by the Society of Actuaries, which analyzed 2.3 million death claims submitted to life insurance firms.

The report looked at death claims filed under group life insurance policies during the 24 months of the COVID-19 pandemic, from April 2020 to March 2022. The researchers used data from the three years before the pandemic to set a baseline for the expected deaths.

While COVID-19 played some role in the majority of the excess deaths for adults over the age of 34 during the two pandemic years, the opposite was true for younger people. For people 34 and younger, the number of excess non-COVID deaths was higher than those related to COVID, the data show.

During the third quarter of last year, deaths in the 25-to-34 age bracket were 78 percent above the expected level and, for people aged 45 to 54, 80 percent higher than expected. Excess mortality was 53 percent above the baseline for adults aged 55 to 64.

The Society of Actuaries (SOA) asked all 20 of the participating life insurance companies how they determine the cause of death for the purpose of recording claims. Of the 18 that responded, 17 said they list COVID-19 as the cause of death if it’s listed anywhere on the death certificate, while eight of the 18 said they go further and communicate with relatives and the medical examiner and look at other sources to try to determine the true cause of death.

The report also notes that white-collar workers had the highest number of excess deaths during the two years studied. The group, which includes accountants, lawyers, computer programmers, and most other jobs done in an office setting, had 23 percent more deaths than expected.

The sharp increase of deaths among working-age people was first brought to light by Scott Davison, CEO of the Indianapolis-based life insurance company OneAmerica, who said in a virtual press conference on Dec. 30, 2021, that his company and the life insurance industry as a whole was seeing a 40 percent increase in deaths among people ages 18 to 64.

Davison said at the time that this represented the highest death rates in the history of the life insurance business, and that an increase in mortality of just 10 percent would constitute a “three-sigma” event, a once-in-200-year catastrophe.

OneAmerica is one of the 20 companies that contributed data for the SOA report. The others include Aflac, Anthem, The Hartford, Lincoln Financial Group, MetLife, New York Life, and Principal Financial.

Edward Dowd, a hedge fund manager who has been studying excess mortality for the past several months, says the rate of deaths among young people is alarming. He pointed out that excess deaths peaked around the time the Biden administration mandated COVID-19 vaccines and companies rushed to comply.

“Temporally, in that three-month period, the change was such that, there was something that occurred,” he said. “Well, we all know what occurred in August, September, and October. It was Biden’s mandates on Sept. 9, and a lot of corporations anticipating those mandates.”

President Joe Biden on Sept. 9, 2021, mandated COVID-19 vaccines for federal employees and health care workers in facilities certified by Medicare and Medicaid. The same day, the president tasked the Occupational Safety and Health Administration (OSHA) with implementing a nationwide vaccine mandate on private businesses with 100 or more employees.

The U.S. Supreme Court struck down the OSHA mandate in January but allowed the mandate for health care workers to remain in place.

The campaign to vaccinate the majority of the population against COVID-19 is the largest vaccination campaign in the history of the world.

As of Aug. 31, about 90 percent of Americans 18 or older had gotten at least the first dose of one of the COVID-19 vaccines, and 77 percent had gotten both a first and a second dose.

Dr. Robert Malone, a physician and research scientist credited with the invention of the mRNA technology for use in vaccines, says excess mortality must always be studied to determine whether a vaccine or medicine really is safe.

Malone mentioned what he calls the “classic example” of thalidomide, a morning sickness medication prescribed to a small number of pregnant women in the United States in the late 1950s and early ’60s that was effective in treating morning sickness, but caused severe deformities in their unborn children.

The drug maker had pressured the U.S. Food and Drug Administration to approve the drug, but the FDA refused, based on the deformities that had been reported.

Cholesterol medication is another example, he added, saying cardiologists were convinced in the 1990s that cholesterol was the “bad actor” and that heart disease numbers would drop if it could be brought down.

“So they came out with some really good drugs for dropping cholesterol, and they ran the trials,” he said, “and it clearly showed that they were effective in dropping cholesterol in humans, to a remarkable level, very, very effective. And everything was on track for approval, at those doses. And then the all-cause mortality data started coming in.”

“And paradoxically, people were dying, but they weren’t dying of heart attacks. Their heart attack death rate was better. They were committing suicide, because when you pull cholesterol out of the brain, you trigger depression.”

In the case of COVID-19, he said, the CDC and FDA have been in denial about what all-cause mortality data show, in particular on the Vaccine Adverse Event Reporting System (VAERS), where the government has only considered deaths that occur within 2 to 3 weeks of vaccination, based on the belief that the mRNA doesn’t stay in the body for longer.

Now, he says, studies clearly show that this isn’t true and the mRNA stays in the body for at least 60 days.

The government is required to study all-cause mortality for any drug or vaccine, says Malone, usually for a period of at least one year following approval. But there’s no indication, he says, that they’ve done this for the COVID-19 vaccines.

“The FDA basically threw away the rulebook, and let Fauci do whatever he wanted to do,” he says.

The Society of Actuaries didn’t have anyone immediately available for comment on the report on excess mortality over the 24-month period, but sent the following statement:

“The Society of Actuaries Research Institute’s January and August 2022 reports regarding U.S. Group Life COVID-19 mortality explore the impact of COVID-19 on the group life insurance sector and does not address or consider vaccine status. The research does not validate any claims made that suggest a causal relationship between COVID-19 vaccines and mortality. Any claims implying such a relationship are a misrepresentation of the data presented in the report and are not reflective of the Society of Actuaries Research Institute’s views.”

The CDC didn’t immediately respond to a request for comment on whether it’s studying all-cause mortality data for safety signals related to the COVID-19 vaccines.