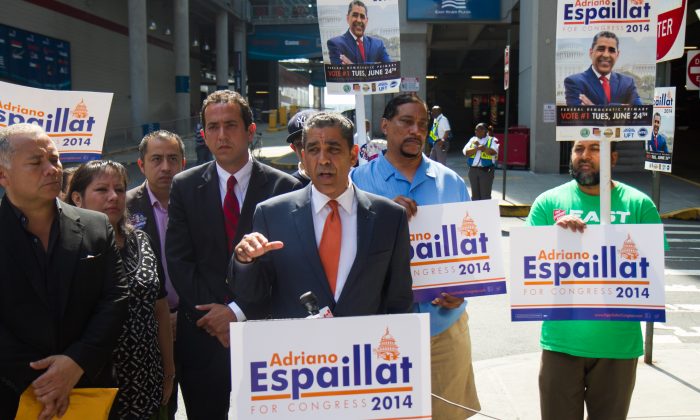 State Sen. Adriano Espaillat, who is running for Congress in 2014, speaks about his campaign at the East River Plaza, in Manhattan, on June 4, 2014. (Jonathan Zhou/Epoch Times)
New York

New York state Sen. Adriano Espaillat, speaking in the East River Plaza with a Target store in the background, criticized Rangel for favoring big box stores at the expense of small businesses.

“We want to shift this model, it’s broken, it has not lifted this neighborhood from poverty, in fact it has pushed people out, we’re looking to make a total U-turn and focus these folks that are here, that represent the heart and soul of this district,” Espaillat said.

Espaillat said he would adjust the policies of the Upper Manhattan Empowerment Zone, or UMEZ, to help smaller businesses with a combination of new tax credits and lower tax rates, as well as fewer subsidies for big businesses. He also promised greater transparency for UMEZ and a budget process with more voter participation. The legislation that created UMEZ in 1994 was sponsored by Rangel.

At the press conference supporting Espaillat were Pedro Matar of the East Harlem Mexican Chamber of Commerce and Gricelda Garcia, a local business owner.

When challenged on how a junior congressman could do more for the district than the long-serving Rangel, Espaillat retorted that Rangel’s ethical violations and his removal from the Ways and Means Committee made Rangel, influence-wise, the equivalent of a first-year congressman.

Rangel’s campaign strategist Charlie King was there to deliver a fierce rejoinder almost immediately after Espaillat finished talking, attacking the state senator as an opportunist.

“You should ask Espaillat’s staff whether or not once in 18 years he raised any objection to the Upper Manhattan Empowerment Zone about how it conducted business,” King argued, “he hasn’t. The fact that he brings it up now is remarkable only insofar that it’s a campaign piece.”

He further attacked the practicality of Espaillat’s proposals.

“There’s no member of Congress who supports Senator Espaillat’s candidacy for congress. It boggles the mind to figure out how, even if he were take these policies that he’s never before proposed anywhere and take them down to congress, how he can get it done,” King said.

A New York Times poll on May 21 showed Rangel leading Espaillat 41 to 32 percent. The primary is on June 24.