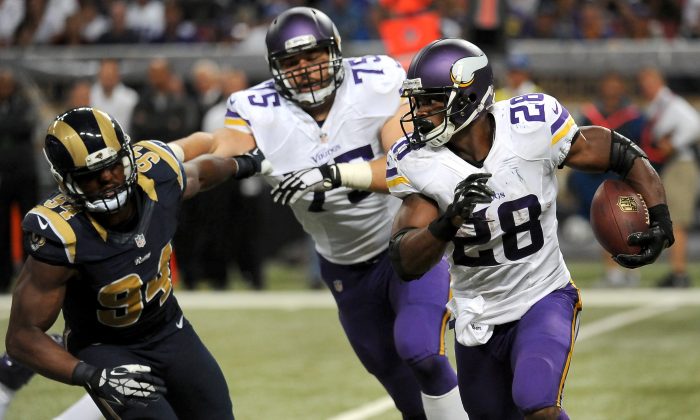 Adrian Peterson Number of Kids: How Many Sons and Daughters Does AP Have? Allegedly At Least 7 Children

Adrian Peterson is in the news due to alleged child abuse and people are wondering how many children he has.

Turns out, the number is elusive, and Peterson won’t reveal how many he thinks he has.

“I know the truth, and I’m comfortable with that knowledge,” he told ESPN last year when asked how many kids he had.

Peterson has two children who live with him and his fiance.

Erica Syion, a former dancer who met Peterson in Houston and has a child with him, told TMZ that Peterson actually has seven kids.

“To my knowledge he takes care of them all,” Syion said.

She said he pays child support but doesn’t spend that much time with most of his children.

“He gets my son in the summertime,” Syion said, “but he could do better.”

Syion couldn’t identify all the children though, and it’s unclear how many of Peterson’s kids are sons and how many are daughters.

MINNEAPOLIS—For as long as he’s been in the NFL, Adrian Peterson has been one of the most popular and most marketable stars in the league, an approachable superstar with the kind of inspirational comeback story that made him an endorser’s dream.

Now that he is facing a felony charge of child abuse for spanking his 4-year-old son with a wooden switch, the Minnesota Vikings running back is facing criticism like he never has before. In the wake of the Vikings’ decision to allow Peterson to play while the legal process plays out in Texas, at least one team sponsor has suspended its relationship with the team, the governor has issued a public rebuke and stores are pullingPeterson merchandise from their shelves.

“It is an awful situation,” Gov. Mark Dayton said Tuesday. “Yes, Mr. Peterson is entitled to due process and should be ‘innocent until proven guilty.’ However, he is a public figure; and his actions, as described, are a public embarrassment to the Vikings organization and the State of Minnesota. Whipping a child to the extent of visible wounds, as has been alleged, should not be tolerated in our state. Therefore, I believe the team should suspend Mr. Peterson, until the accusations of child abuse have been resolved by the criminal justice system.”

Vikings owners Zygi and Mark Wilf deactivated Peterson for the 30-7 loss to the New England Patriots on Sunday while they tried to gather more information about the case. After reviewing files, speaking toPeterson, his attorney and authorities, the Wilfs decided to reinstate Peterson and he plans to play this weekend at New Orleans.

Radisson Hotels suspended its local sponsorship deal with the Vikings a short time later; the chain’s logo was on the backdrop behind general manager Rick Spielman when he made the controversial announcement Monday to bring back Peterson.

Nike stores at the Mall of America in Bloomington and at an outlet mall in Albertville pulled Petersonmerchandise. The Associated Press left a message with Nike seeking comment. Mylan Inc. said it was no longer working with Peterson to promote its EpiPen, used to treat allergic reactions. The running back had participated in several promotions to raise awareness for anaphylaxis, which he has dealt with in the past.

“Mylan has ended all activities with Adrian Peterson,” spokeswoman Julie Knell said. “We remain committed to supporting those managing potentially life-threatening allergies and will continue our educational efforts to increase anaphylaxis awareness and preparedness.”

U.S. Bank, which is rumored to be in the running for the naming rights to the team’s new stadium, said it is “monitoring the situation closely.”

So is Shaun Hagglund, the owner of Fan HQ in suburban Minneapolis who said he pulled Peterson apparel from the store’s shelves as soon as the charge came down on Friday night.

“I’m not making a moral stand or a judgment,” Hagglund said. “Just for now, let’s see what comes of this and see what stories are true and which ones are not and take it from there.”

Other sponsors were still standing behind the Vikings and Peterson, including Verizon Wireless.

“We are supportive of the NFL and, at this point, we are satisfied with our sponsorship of the Minnesota Vikings,” Verizon said in a statement to The Associated Press. “In fact, for the past several years we have collaborated with the Vikings on several programs to raise awareness of the impact of domestic violence, an issue Verizon has had a long-standing commitment to.”

Peterson has not spoken to reporters since his arrest, but he did issue a statement through his agency on Monday that in part addressed the negative attention that his situation has brought to the team.

“I never wanted to be a distraction to the Vikings organization, the Minnesota community or to my teammates,” Peterson said. “I never imagined being in a position where the world is judging my parenting skills or calling me a child abuser because of the discipline I administered to my son.”

Seeing Peterson, a player who has worked tirelessly in the community and been the face of the franchise practically since he arrived in Minnesota in 2007, put in the public crosshairs was just as jarring to some of his teammates.

“The Adrian I know does a lot of stuff for charity. He’s raised hundreds of thousands of dollars for special needs children, brings kids up here from Texas, gives them a dream and something to shoot for,” fullback Jerome Felton said. “Brings kids from the inner cities, takes them to Dick’s Sporting Goods and spends thousands of dollars of his own money. So that’s the guy I know and I’m glad to have him back on the team.”