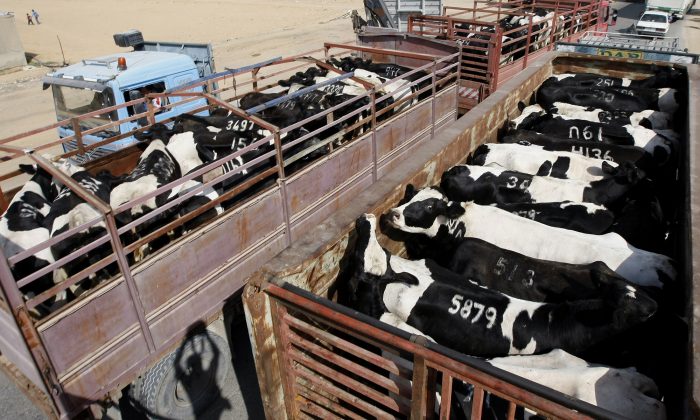 When Brianna the cow realized that she was on her way to an untimely fate, the adorable bovine took a leap of faith—literally—and escaped the truck that was carrying her to a slaughterhouse.

While her runaway adventures would be exciting enough on their own, though, things got even more adorable when her rescuers realized just how crucial her escape had been!

Brianna was found running around Interstate-80 in New Jersey after jumping off of a transport truck, and after the police finally managed to calm her down, she was brought to the Skylands Animal Sanctuary and Rescue.

If her face isn’t adorable enough, though, her backstory is even more precious. Not long after arriving at her new home, as soon as she felt safe, she gave birth!

The sanctuary and rescue shared her story on Facebook, introducing the world to her new baby calf Winter.

“Brianna is now the proud mother of a beautiful baby girl named, Winter ?????? she came to us at 1:30pm on 12/29/2018. You can hear my voice change when I say ‘Hi baby,’ that is because I saw Winter open her eyes for the first time and look right at me. Easily one the most incredible things I’ve ever been involved in, but also extremely nerve racking because the Dr. hadn’t gotten here yet.”

Momma Brianna and baby Winter love each other so much❤️❤️❤️ It’s beautiful to watch them together..

The sanctuary obviously wasn’t prepared for the birth, since they weren’t aware that the rescued cow had been expecting when she arrived at her new home. But clearly, once she settled in and they realized that they were now raising two new cows instead of one, it became apparent that the sanctuary was thrilled about their newest arrival!

Brianna and Winter now get to spend their time together without the risk of getting turned into food, and the pictures couldn’t be any cuter:

“She’s never had freedom, she’d been impregnated about nine months ago, and had already lost her home and her family, but that wasn’t enough, EVERYTHING was about to be stolen from her, her beautiful baby, and her life,” wrote Mike Stura, the sanctuary’s founder, on Facebook.