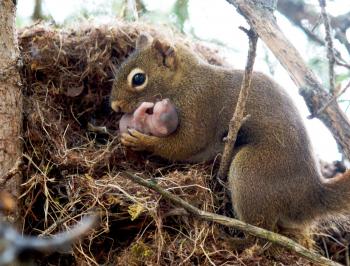 Adoption Not Limited to Social Animals

Researchers have found that red squirrels, an asocial species, will adopt their orphaned relatives. After almost 20 years of study, five cases of adoption in red squirrels are documented in a research paper published in Nature Communications this month.

“Social animals, including lions and chimpanzees, are often surrounded by relatives, so it’s not surprising that a female would adopt an orphaned family member because they have already spent a lot of time together,” said Dr. Andrew McAdam of the University of Guelph in a press release.

“But red squirrels live in complete isolation and are very territorial. The only time they will allow another squirrel on their territory is the one day a year when the females are ready to mate or when they are nursing their pups.”

During the study, 34 cases of potential adoptions, where there is a nursing squirrel near the orphans, were identified. Five such cases resulted in adoption, in all of which the pups were nieces, nephews, siblings, or grandchildren to the adoptive mother.

Squirrels can identify their relatives by listening to their calls, according to McAdam. They may investigate if they don’t hear a nearby relative’s calls for a few days.

“We suspect that, if they find pups on the territory, they remember that their neighbor was a relative and carry the pups back to their nest. This would be quite intelligent behavior for a squirrel,” said McAdam.

Video clips from the study are available at http://www.redsquirrel.ca/KRSP/MediaVideo.html