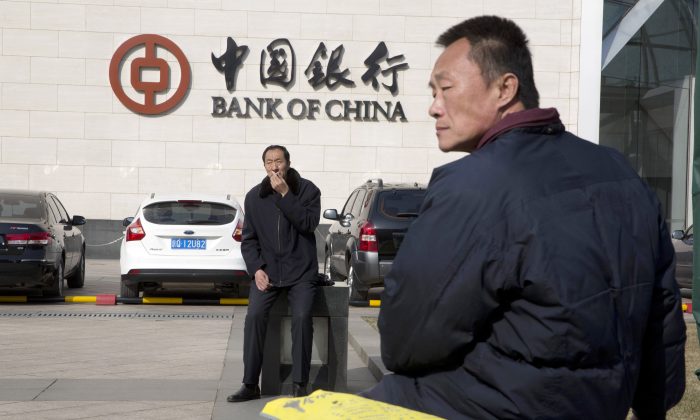 Beijing Pushes Monetary Easing Ahead of US Interest Rate Hike

As the U.S. Federal Reserve (the Fed) quickens its pace of tightening, the Chinese Communist Party (CCP) authorities unleashed a barrage of easing policies this month to stimulate China’s economy, with the two countries’ monetary policies apparently pointed in opposite directions. Some analysts believe that the early release of an easing policy by the People’s Bank of China (PBOC), the CCP’s central bank, is taking advantage of the window before the Fed raises rates. Otherwise, the RMB exchange rate will be under pressure, and the market will face the risk of capital outflow.

As market expectations rise, the interest rate gap between China and the United States also accelerates to a narrower margin. The RMB exchange rate and the Chinese market capital trends have become a focus.

On Jan. 17, the PBOC lowered the medium-term Lending Facility (MLF) rate by 10 basis points to 2.85 percent. The next day, Liu Guoqiang, deputy governor of the PBOC, said at a press conference that the Chinese economy was facing triple pressures, and the monetary policy toolbox should be opened wider before the downward pressure eased.

China’s central bank subsequently authorized the National Interbank Funding Center to announce that the loan offer rate (LPR) on Jan. 20, 2022 is: One-year LPR lowered 10 basis points to 3.7 percent, the second cut in two months; and a five-year LPR , a benchmark for medium-and long-term loans including residential mortgages, was lowered by 5 basis points to 4.6 percent, the first cut since April 2020. Authorities are expected to ease monetary policy to address real estate risks and worsening downward economic conditions.

China’s easing cycle is in full swing, said Sheana Yue, an economist with Capital Economics, the Wall Street Journal reported on Jan. 20. The central bank will continue to cut interest rates in the coming months to support housing demand.

Easing Policies Rolled Out Ahead of Schedule

The acceleration of easing policies by the central bank comes after market expectations for a U.S. Federal Reserve interest rate hike in March started heating up.

The Economist Intelligence Unit has released its latest report, which predicts that the Fed will gradually raise interest rates starting in March. Nine hikes are expected, including four in 2022, four in 2023, and one in 2024, which would take the federal funds target rate to about 2.4 percent in 2024-26 timeframe.

In an interview with The Epoch Times, Mike Sun, a senior investment advisor in the United States, said that the reason Beijing cut LPR is directly related to the rising expectations of interest rate hikes by the Federal Reserve. Beijing is now going the other way for a number of purposes. One main reason is that Beijing wants to seize this short window to stimulate the economy and prevent further decline. Other purposes include reducing the pressure of mortgage repayment for borrowers and indirectly stimulating consumption.

Hong Hao, managing director and head of research at BOCOM International, said in a report titled “China Market Strategy” published on Jan.19: “With the Fed tightening looming and the China central bank continuing to ease policies, the RMB is likely to weaken. Given the historical correlation between Chinese and U.S. monetary policies, the window for large-scale easing policies is rapidly closing—otherwise it would put pressure on the RMB and risk triggering speculative capital outflows. This window of time for a rapid closure of monetary policy explains why the central bank has moved up its easing agenda.”

The CCP authorities have previously expressed concern about potential risks to China’s capital markets from the U.S. policy of raising interest rates.

On Jan.6, Financial News, a state controlled media in China, published a commentary warning companies to beware of the risk of capital outflows. If the Fed starts raising interest rates in March, the number of rate increases could rise to four for the year, which is already close to 40 percent, the article said.

The commentary further explained that, if the Fed raises interest rates more than expected, it will push up U.S. bond yields and narrow interest rate differentials between China and the United States. Cross-border capital may flow out of emerging markets, including China, and the depreciation of emerging market currencies, including RMB, may be pushed. In addition, if global financial markets fluctuate due to interest rate hikes and investors’ expectations shift, it may increase external uncertainties and some risks may also spill over to the Chinese market through capital flows of emerging economies.

This follows a rapid decline in China’s 10-year bond yield, which was below the 2.8 percent mark on Dec. 30, 2021. According to the January bond market outlook released by CITIC Securities on Jan. 5, the 10-year U.S. bond rate has rapidly risen above 1.6 percent, and the U.S.-China interest rate differential has narrowed to around 115 basis points.

On Jan. 19, U.S. 10-year Treasury yields climbed further and once approached 1.9 percent before falling back. On Jan. 20, China’s 10-year Treasury bond active securities 210017 was last traded at 2.72 percent after the CCP’s central bank lowered a five-year LPR. The U.S.-China interest rate differential hit its lowest since May 2019.