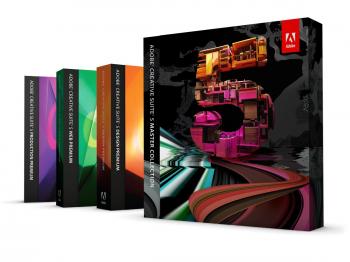 INTERACTIVE DESIGN: A box shot of the Adobe Creative Suite 5 product packages. Flash Catalyst CS5 is included in each of the suites and allows users to create interactive content in Flash without needing to use code. (Courtesy of Adobe)
News

Flash, Adobe’s application for creating Web-based animations, has a new member to its product line with Flash Catalyst, new to the Creative Suite 5 (CS5).

The draw of Flash Catalyst CS5 over Flash Professional CS5 is that it can create interactive menus and websites without the need to write code. This makes it accessible to designers and artists who would rather focus on the imagery itself rather than the coding behind it.

Flash uses a type of code known as Actionscript. It can be used for embedding videos and audio into websites, creating interactive websites, making cartoons, and in the creation of some Web-based games. Even if you think you aren’t using Flash while browsing the Web, you probably do so regularly.

Flash Catalyst CS5 takes the technology a step further by allowing users to access the power of Flash without needing to master Actionscript code—although it still allows users to utilize the code if they’d like.

It should be noted, however, that the application is not really for creating things such as cartoons or games. It’s more for making interactive menus, buttons, and websites.

Creating animations and interactivity in Flash Catalyst CS5 is as simple as Adobe suggests. Users familiar with Photoshop, Illustrator, and Fireworks should be able to figure out the application rather quickly, as it shares a similar interface.

There are just a few tools for editing color and creating shapes, lines, and text. There are also pre-made components that can be dragged onto the workspace and implemented, such as buttons, horizontal and vertical sliders, and radio buttons.

As you create different shapes and elements, menu boxes will appear on the workspace that will tell you what parts you need in order to create a certain type of animation.

To create a scrolling text section, for example, a user would first create one long shape as the track and a smaller shape as the button, and identify each within the application. They’d then select the text or image that would scroll.

It is also rather easy to customize the flow of animations. The animation timeline works with boxes that the user can drag and extend. Users can customize each box on the timeline to make the content rotate in 3-D, fade in or out, transition smoothly, and so on.

Flash Catalyst is also developer friendly. Under its hood is the Adobe Flex open source framework. It has two menus—one for code and one for design. While you work, the application will create code in the background that can be accessed at any time.

The application also integrates with Photoshop, Fireworks, Illustrator, and Flash Builder so users can move between the applications to edit their work without losing the interactive parts they’ve made in Flash Catalyst.