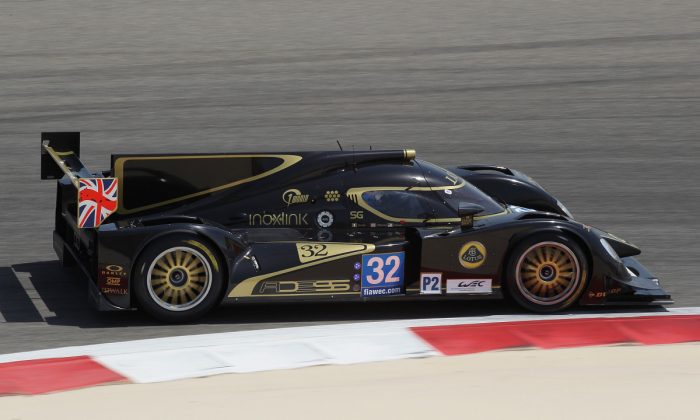 The Adess- Lotus T128 in action at the WEC Bahrain round. Adess has designed a P1-specific chassis for 2014. (www.adess-ag.com)
Motorsports

Adess AG, the German firm responsible for the LMP2 Lotus T128, has completed development on an LMP1 chassis designed for the new 2014 FIA endurance racing regulations.

The project, started in November 2012 and first announced in April 2013, “is now entering its final design stage” according to an Adess (Advanced Design and Engineering Systems Solutions) press release.

“Our target is to establish a permanent position as manufacturer in the LMP-classes,” said Adess CEO Stéphane Chosse.

“The new 2014 LMP1 regulations allow private manufacturers such as ADESS to demonstrate their technical abilities. The design is completed and we are looking forward to present the car together with a potential partner.”

Adess wants to put two cars on the grid for 2014’s World Endurance Championship season. The next step is finding a team interested in racing the new design in 2014.

The car has been designed around a specific engine, though the company will not reveal which one, and is not designed as a hybrid, though a hybrid system could be incorporated if the customer so desires.  Cost of the completed chassis is projected to be $1.3 million, cheap for a P1.

Chosse, whose resume includes fifteen years in Formula One workings with Ligier and Sauber and Toyota Motorsport GmbH, Set up Adess specifically to build sports car prototypes. The new firm’s first project was the Lotus T128, which has been racing in WEC’s P2 class in 2013.

Adess designed and built the new Lotus for Colin Kolles’ company Kodewa GmbH. Along with overseeing Kodewa’s efforts in F3 and the Le Mans Series, Kolles was an F1 team manager for Jordan, Midland, Spyker and Force India from 2005 through 2008, and for HRT from 2009 until its demise in 2011. Chosse was Chief of Aerodynamics at HRT.

Adess designed the T128 to meet 2014 regulations for overall dimensions, driver position, and outward visibility. With minor modifications the chassis will be eligible in both the P1 and P2 classes in 2014.

The new Adess P1, should it be built, would join a very deep field of P1 prototypes in the WEC next season. Toyota, Audi and Porsche will all enter factory teams, while in the privateer ranks Rebellion will be joined (potentially) by the new Perrinn P1, and also the just-announced Oak Racing chassis.

Japan’s Dome Co. also has a chassis in the wind tunnel, which like the Lotus T128, meets both P1 and P2 2014 regulations.

This list does not included existing P1 chassis which will be grandfathered in for the 2104 season. Teams like Straka or ALMS champions Muscle Milk Pickett Racing could opt for new cars or use their 2013 HPD chassis in 2014.