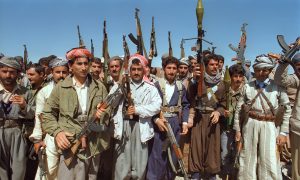 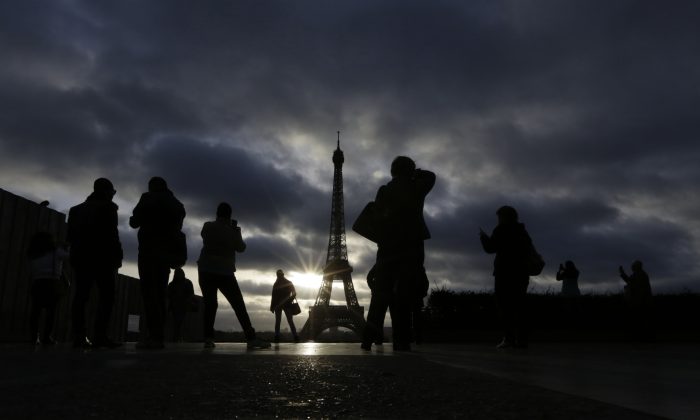 Tourists visit the site of Eiffel Tower which remained closed on the first of three days of national mourning in Paris on Nov. 15, 2015. Thousands of French troops deployed around Paris on Sunday and tourist sites stood shuttered in one of the most visited cities on earth while investigators questioned the relatives of a suspected suicide bomber involved in the country's deadliest violence since World War II. (AP Photo/Amr Nabil)
International

The recent events in Paris demonstrate again that contemporary terrorism remains a global threat. The deliberate slaughter of 130 innocent victims there is at least providing indications of becoming the catalyst that will effectively unite enough world governments to defeat “Daesh” (also known as Islamic State, or ISIS).

Purporting bizarrely to act in the name of Sunni Muslims, ISIS has in the few years since it emerged accumulated a horrific record of violence.

In Iraq alone, according to a U.N. report, the ISIS conflict killed almost 15,000 civilians and wounded 30,000 others during an 18-month period. More than 2.8 million Iraqis are today displaced within their country, including 1.3 million children. Some ISIS violence across Iraq appears to amount to crimes against humanity and probably genocide.

Nobody is immune to terrorists, who use every opportunity to attack their deemed enemies throughout the world.

The regional mayhem now includes an estimated 5 million Syrian refugees scattered across the Middle East and Europe. Many others are displaced inside Syria and struggle daily to avoid ISIS assassins, soldiers of Syrian tyrant Bashar Assad, and bombs from Putin’s aircraft defending Assad.

The Syrian Network for Human Rights has documented the deaths of 9,025 civilians in the first half of 2015 alone, with the Assad regime having killed seven times as many as ISIS.

With millions of Syrian refugees now living in makeshift camps in Syria’s neighbouring countries, the 25,000 intended by the new Canadian government to come to Canada before the end of 2015 will make so little substantive difference that Ottawa should up the number significantly after security checks. The United States should also accept far more than the token 10,000 the Obama administration has to date agreed to accept.

The responsible international community today faces the challenge of defeating both Middle East terrorism and ousting the Assad regime in Syria. The massacre of more than 250,000 innocent Syrians with the likes of barrel bombs and chemicals during almost five years of civil war, the inexplicable support by Western democracies for Maliki during eight years in Iraq, and ignoring the destructive meddling of the Iranian regime in the Middle East have together also contributed to the chaos of today.

Self-proclaimed jihadis have sought world domination through the establishment of their caliphate especially aggressively since Iran’s revolution in 1979. Many Iranians in its large diaspora abroad consider the clerical regime in Tehran to be the real godfather of ISIS.

Nobody is immune to terrorists, who use every opportunity to attack their deemed enemies throughout the world. This includes the Boko Haram in Nigeria, al-Shabab in Somalia, Lashkar-e-Taiba in Pakistan, and the Taliban in Pakistan and Afghanistan.

It is perhaps useful to consider why Paris might have been chosen for the recent attacks. Since the end of the Algerian war in 1962, as the journalist Erna Paris points out, France has failed to integrate its Muslim citizens.

With only about 8 percent of France’s population, Muslims today comprise 70 percent of its prison population. In 2004, it banned students from wearing religious symbols, such as head scarfs, to school. In short, Muslims were seen as unwelcome in stridently secular France.

The United States and Canada are both well-positioned to respond effectively to terrorists, primarily because of our two comparatively successful multicultural societies. Despite lapses—which are quite properly widely reported—most of our respective residents of myriad origins, cultures, and faiths today actively seek to live in harmony and mutual respect with their neighbours.

When, for example, an arsonist damaged a mosque in Canada, a crowd funding project to repair it soon far exceeded its financial goal. In both countries, most of us understand that ISIS and its Iranian counterparts yearn for acts against Muslims anywhere across the world.

Its leaders aspire to turn Muslims in the West against the nations and neighbours where they live and to ignite religious wars. An apocalyptic showdown with the West and the many branches of Islam that have already faced its inhuman violence is expected.

Both President Obama and Prime Minister Trudeau should accept that the carnage in Paris has changed what is required. A closely coordinated military campaign against ISIS and a brokered cease-fire in Syria are needed quickly. Turkey and other allies of the West must be persuaded to do much more.

Western ground troops for a host of reasons should not be sent to Iraq, but full support should be given by both our governments and others to the most reliable partner of the anti-ISIS coalition: the Kurds and their peshmerga forces. The Kurds have proven to be effective against ISIS and now appear ready to assist the Iraqi government forces against ISIS.

Despite all, ISIS can and must be defeated in Syria and Iraq if the international coalition becomes sufficiently clear-eyed and determined.