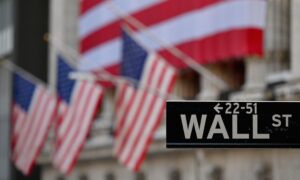 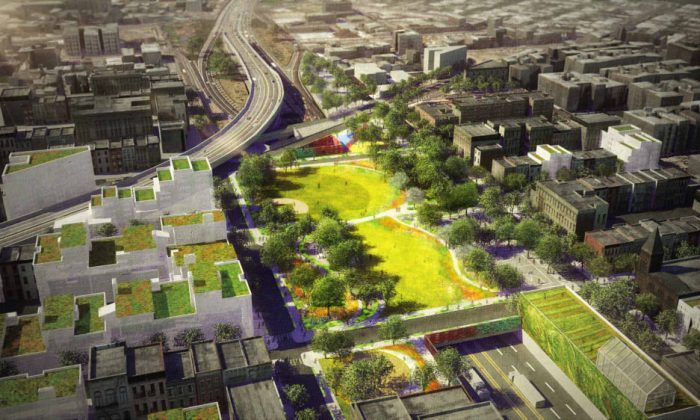 A rendering of the BQ Green in South Williamsburg, bridging together parts of the neighborhood now separated by the Brooklyn Queens Expressway. (dlandstudio)
New York

Pilot projects in landscape architecture can solve issues of comfort, beauty, and livability
By Catherine Yang

Most people are not completely clear on what a landscape architect does, but according to Susannah Drake, founder of interdisciplinary design firm dlandstudio, it boils down to a mix of art, science, and politics.

When Drake started her company in 2005, she had been interested in theory, but wanted to address real problems. “I care very deeply about the practicality and the sustainability, and I care about smart design detail. But fundamentally I think that design work, particularly in an urban setting, is about creating comfort, and beauty, and livability,” Drake said.

Drake grew up in a family of botanists, with a love for design and the great outdoors. But over time, she developed a fondness for taking on the challenges of cities like New York to discover creative urban infrastructure solutions.

Drake started out applying for research grants in areas she was interested in, and using that work to solve real problems. In one of her earlier projects, what started out as a transportation study became the groundwork for a park.

The New York State Council on the Arts awarded her firm a grant to study the Brooklyn Queens Expressway (BQE), a six-lane highway originally proposed as a way to reduce congestion, running through low-income neighborhoods in Brooklyn and Queens.

Drake had been tasked with reducing the negative environmental impacts of the expressway, and came up with a way to connect neighborhoods once divided by the BQE’s construction.

To address problems like the region’s ecology, dlandstudio added green space and designed it in a way to connect neighborhoods. With the help of local officials, city agencies are trying to secure funding for development of the space.

The effect of these small, pilot projects cities are implementing is potentially endless. The right ones, when implemented a million times, Drake said, “can start to transform our country.” The research Drake has done with grants sometimes snowballs into another grant study, then a bigger project. A feasibility study to cap a trench can turn into a green amenity for residents.

“It’s combining an aesthetic sensibility with a very pragmatic approach to the development of these kinds of [open space] infrastructure,” Drake said. “It’s really applied research, it’s not purely academic.”

The Gowanus Canal Sponge Park, for example, was not something the city solicited plans for. But minimizing flooding, removing surface water when it rains, taking toxins out of storm water—these are all objectives of the city’s various departments. “Because of that quasi-independence and quasi-connection, I’m able to make things that don’t happen normally very quickly—or at all in New York City—happen,” Drake said.

Red tape can create obstacles. There aren’t many people out there crazy enough to do this, Drake said, as there’s more paperwork involved in this city than many of the ones she’s worked in across the country. “[For] any waterfront project, you need 200 potential permits. And the number of meetings that are involved in getting that many permits is just insane.”

But, “it’s fascinating to try to figure out how to work within these complicated situations,” Drake said.

For many, landscape architecture has become associated with picturesque scenery, but the practice itself reaches much farther in scope. “[Olmsted] was all about public health and how to use landscape to create better or healthier cities.”

Drake spends a good portion of her time giving talks on landscape architecture to different industries and agencies, policymakers, and universities. People are always surprised. “It’s really such an incredible synthesis of different disciplines,” Drake said. “There are a lot of smart people who become engineers in order to solve problems, but engineering is actually a very specific discipline.”

In helping people understand the role of landscape architecture, Drake hopes to prevent misguided policies. Hurricane Sandy has brought a greater interest in resiliency and sustainability citywide. Two years before the storm, dlandstudio participated in the Museum of Modern Art’s Rising Currents exhibition with solutions for such a flooding event.

“A lot of the ideas we suggested are now being explored and implemented, which is flattering and exciting,” Drake said.

But policy in these areas should be guided by experts. In one case, Drake explained, there was controversy over using artificial turf on ball fields because it wasn’t seen as being ecologically friendly. She discovered that 5 percent of emissions in the country come from mowing natural turf, and it would require planting trees every 30 feet from Maine to Virginia to offset that.

“We try to reveal some of the reasons it might be good to do something that might not seem at all that sustainable on the surface,” Drake said.