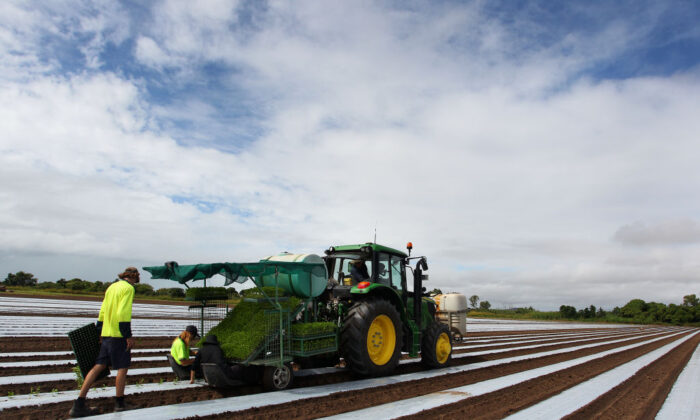 Nationals Party leader David Littleproud said the agriculture industry currently faces a workforce shortage of over 170,000 workers, which the Nationals say will only get worse if the federal government scraps the agricultural visa.

Littleproud warned the shortage would steer Australia dangerously close to a food security crisis that could lead to further spikes in cost of living.

“Regional Australia is in the middle of a workforce crisis, and this impacts just about every industry you can think of,” he said in a press release. “We need access to workers quickly otherwise, the ramifications of this shortage will be felt for a long time to come.”

The Nationals leader said many farmers were planning not to plant crops for the next season because there were not enough workers to pick the crop, which in turn, could lead to supply constraints and further pricing increases.

Currently, the Albanese government is using the pre-existing Pacific Australia Labor Mobility Scheme to get migrant workers into the country. On April 22, the government introduced two new visa programs, the Seasonal Worker Programme and the Pacific Labour Scheme.

Littleproud said the Scheme was limiting the government’s response to the workforce crisis and has criticised the Labor government’s decision to stop the agricultural visa program. The original agreement was set up under the previous Liberal-National Coalition government with countries like Vietnam to source workers.

“In opposition, they were made aware of the workforce shortage. Yet when they came to the government they were given a solution, an agreement was already in place, yet they made a decision to side with the [Australian Worker’s Union] and tear it up,” Littleproud said.

The Nationals leader said the Scheme was now being leveraged to find workers for the aged care sector, with around 50,000 workers available.

“There was no need to start from scratch on this. The Ag. Visa, allowing pensioners and veterans to work more hours without impacting their payments, and a Regional Skilled Visa that is broader than just agriculture and food processing would shift the dial for cost of living pressures.”

The National Farmers Federation (NFF), part of the Food Supply Chain Alliance (FSCA), agreed with Littleproud saying the agriculture sector was the one area the federal government could address to help curb inflation.

“This is one of the few ‘cost of living’ pressures the government can influence. The Alliance believes the food sector, given it provides an essential service to the community, must be a priority at the upcoming Jobs and Skills Summit, which must deliver viable solutions to be considered a success,” the NFF said in a media release.

The FSCA represents over 160,000 businesses and has a combined revenue of over $200 billion (US$139 billion) and includes the National Farmers Federation, the Australian Meat Industry Council, Seafood Industry Australia, Independent Food Distributors Australia, AUSVEG, Master Grocers Australia, Restaurant and Catering Industry Association, and the Australian Association of Convenience Stores.

CEO of the National Farmers Federation, Tony Mahar, said the farm sector’s struggles would flow onto the hip pockets of everyday Aussies.

“Farmers are making the difficult choice not to plant some crops, because they can’t guarantee they’ll have workers for harvest. If crops don’t get planted, less food gets grown, and people pay more. It’s a simple equation. We need appropriate visa solutions to attract workers and ensure they’re treated fairly,” Maher said.