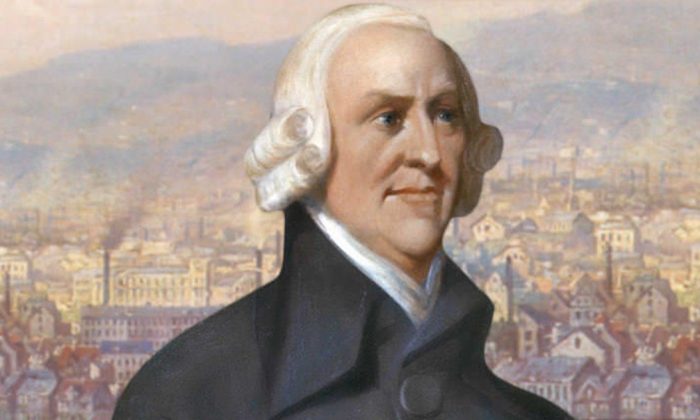 Adam Smith, born 295 years ago, did not use the word capitalist but promoted liberty, private property, and economic freedom. (Creative Commons)

This past weekend, it was the 295th birthday of Adam Smith, champion of trade and the philosophical mastermind who explained the end of the old world and the beginning of the new. And yet, at this time, after so many centuries of intellectual work to promote economic and political freedom, we hardly have any left, even in the United States.

Even though they weren’t called by that name at the time, Adam Smith fought against socialist ideas during his illustrious career, not only as the first truly and justly famous economist but also as a trenchant observer of ethics and psychology.

The Essence of Smith

If you heard about him in college, Smith was probably described as the originator of the capitalist ethos. This is deeply misleading. Smith wrote two books: “The Wealth of Nations” (1776) and “The Theory of Moral Sentiments” (1759). Both should be read by every civilized person. They will change the way you observe and understand the world around you.

Neither includes a plan for implementing capitalism. Nor is it correct to call him the father of capitalism, as if it needed to be born out of the mind of an intellectual (that would be this thing called “socialism”). Instead, these two books are a series of observations and explanations of the operation of society and economy of his time, with the goal of putting together a theory to shed light on human decision making.

“The Wealth of Nations” is a book about a subject that had been a source of enormous mystery and confusion for several millennia: what causes nations to become wealthy?

Smith explained that wealth comes mainly from the division of labor, which is to say: people cooperating with each other, in their own personal interest, in a way that coordinates their specialized talents. In order to enable that condition, we need security of ownership, a means of saving, the presence of capital that allows the building of complex production structures, and the freedom to innovate.

His famous statement is as follows: “It is the great multiplication of the productions of all the different arts, in consequence of the division of labour, which occasions, in a well-governed society, that universal opulence which extends itself to the lowest ranks of the people.”

His explanation with examples extends over an entire treatise. As regards the problem of free trade, he has a strong desire to break down old mercantilist notions like the balance of trade or the idea that it is always better to export than import. “It is the maxim of every prudent master of a family,” he wrote, “Never to attempt to make at home what it will cost him more to make than to buy … What is prudence in the conduct of every private family can scarce be folly in that of a great kingdom.”

Smith’s book is sometimes called the first great treatise on capitalism, though Smith didn’t use the term. Honestly, it’s not a bad designation overall. It has mistakes, yes, such as some problems with value theory which led to problems later, and he is too tolerant toward various forms of government intervention. Overall, however, friends of freedom could have done much worse. It remains a tremendously insightful masterwork that deserves close study.

Then there his sadly neglected other treatise on moral psychology. “The Theory of Moral Sentiments,” which I only recently read for the first time, is absolutely thrilling in its intellectual daring. He covers the curious topic of what provides us personal delight, what disgusts us, what we like and what we do not like in others, the kinds of behaviors that trigger sympathy for others and that which leads to revulsion. He offers some powerful and surprising insights on the origin and development of ethical norms.

What I find most satisfying about the treatise is how sincere and reflective it is on human motivation. People are complex and Adam Smith knew it. Yes, there is a presumption of self-interest operating here, consistent with the reputation of a capitalist philosopher explaining why people do what they do. But more much interesting is that he seeks to provide an insightful account, namely human affection for others and their plight and the conditions that give rise to it.

There is nothing here that can be caricatured as “economic man,” a purely maximizing mental machine. Instead, you will find a humane and complex conception of human motivation, pursuing our best interest but also seeking goodness, justice, charity, and the well-functioning of society itself. There is a reason that socialists and others who put down the free market don’t want you to read this. It is a beautiful expression of the most attractive theory of political economy ever devised, what was once called liberalism, the conception that human beings are better managers of society than any appointed official.

Both books are wonderful gifts to humankind. We are so fortunate to be able to access them so quickly and at no charge, thanks to the internet. May they circulate again widely, and teach another generation the material and spiritual merits of the idea of freedom. And never forget, as Adam Smith taught us, that peace, free trade, and prosperity go together.

Jeffrey Tucker is editorial director for the American Institute for Economic Research. This article was first published on AIER.org.